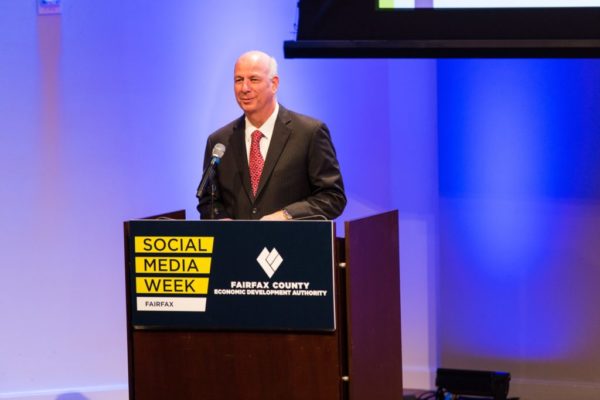 (Updated at 5 p.m.) It’s fair to say that the Tysons of today might not look the same without Gerry Gordon.

To get some perspective on how much Fairfax has changed since Gordon took over the Fairfax County Economic Development Task Force (FCEDA), these black-and-white satellite pictures of Tysons were taken one year after he became President and CEO of the group in 1987. While there was development, the area was not the metropolis it has become today.

At the end of the year, Gordon will step down from that long-held position and accept a post as a fellow in the College of Charleston in South Carolina.

On Thursday, Nov. 1, the Greater McLean Chamber of Commerce will host a celebration of Gordon’s legacy in Fairfax with support from other select Fairfax Chambers of Commerce. Tickets to the event are $40 for chamber members or $50 for non-members, which includes admission, appetizers and one drink ticket. Event sponsorship tickets are also available for $75. The event will run from 5:30-7 p.m. in the Tower Club (8000 Towers Crescent Drive) in Tysons.

The event is hosted at the center of a region Gordon was instrumental in helping to transform. Some of the largest names plastered across the top of Tysons skyscrapers — Booz Allen, SAIC, Hilton, Capital One, etc — were in part brought to the area by the work of the FCEDA. Recently, Tysons was chosen over the District of Columbia as the expansion choice for KPMG LLC, an auditing firm that will occupy seven floors of The Boro.

The FCEDA, under Gordon’s leadership, works internationally to market Fairfax as a business destination. Since the early 1980s, Fairfax County has grown from 32 million square feet of office space to 117 million, the second largest suburban office market in the nation behind Orange County.

FCEDA is funded by the Fairfax County government. The group is headquartered in Tysons but has locations in Bangalore, London, Los Angeles, Berlin, Seoul and Tel Aviv.

Outside of the business expansions, Gordon has also helped the group build bridges with other regional groups. The FCEDA facilitated the creation of the Multicultural Chamber Alliance, a collaboration of the Virginia Hispanic Chamber and Asian American Chamber of Commerce in Tysons along with the Northern Virginia Black Chamber of Commerce in the Mount Vernon area. Earlier this year, Gordon led the groups in signing an even closer agreement of collaboration.