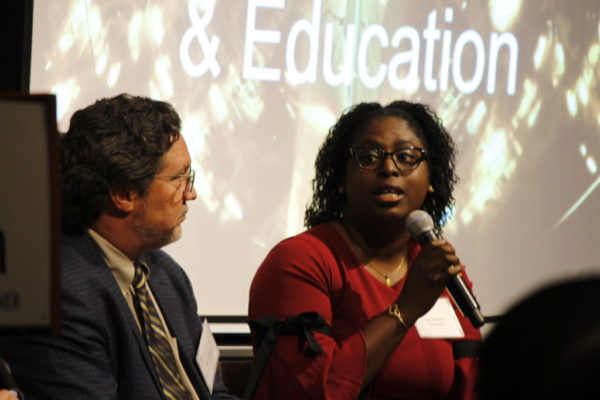 Tysons 2050, an event hosted by the Tysons Regional Chamber of Commerce yesterday at the Tysons Hilton (7920 Jones Branch Drive), brought technology experts across the region together to discuss how trends in cyber-security and AI will impact Tysons.

This growth will continue to spur development, which is well underway in various corners of Tysons. The View, a 3 million-square-foot mixed-use building planned for Tysons, is planned to be 600 feet tall, dwarfing the 470-foot Capital One Tower that currently claims the title of tallest in the region.

As Tysons moves forward, Lusk says there are certain elements beyond just office space and retail needed to make the area more than just a commuter hub. For instance, Lusk said, Tysons will need to have at least two performing arts centers in the area and a research university.

Paul McNeal, the co-founder of CryptoMarket360, said the future Tysons will look like something out of science-fiction.

“If you’ve seen Minority Report or Demolition Man,” said McNeal, “that’s where Tysons is headed in 2050.”

McNeal envisions technology driving Tysons towards a “frictionless society” with interactive ads based on user data and self-driving cars.

But as Tysons moves into the future, one of the main discussions centered on how new technology will also present challenges and opportunities for Fairfax County Public Schools (FCPS).

“The student to teacher ratio is going to be 200 to one,” said George Strawn, former National Science Foundation CIO. “But that’s carbon-based teachers. Everyone will have their own silicon tutor.”

Not everyone who spoke saw the future so starkly different as today.

Tarun Upaday, founder of Gallop.ai, said that the artificial intelligence in classrooms will be used more to complement the teachers rather than replace them. Upaday pointed to the current status of chess championships, where the top teams are not brilliant chess players or supercomputers, but fusions of the two that beat solely computers or solely human teams every time.

Upaday also said the work of Pindar Van Arman, whose machine artists were recently on display at Tysons Corner Center, represented what man and machine can accomplish working in harmony.

Falls Church-based education specialist Tosin Adetoro said artificial intelligence can also be used to support student populations that often fall through the cracks of the education system. In particular, Adetoro said personalized AIs have been found to be very helpful for students on the autism spectrum.

Jay Garant, director of Business and Community Partnerships at FCPS, emphasized that as valuable an asset as AI will be, it can’t replace teachers. As students begin to spend more and more of their lives staring at their phone screens, Garant said schools will be critical in teaching empathy.

“When kids begin to fail, they are more likely to [positively interact] with a human than anything else,” said Garant. “That won’t go away.”