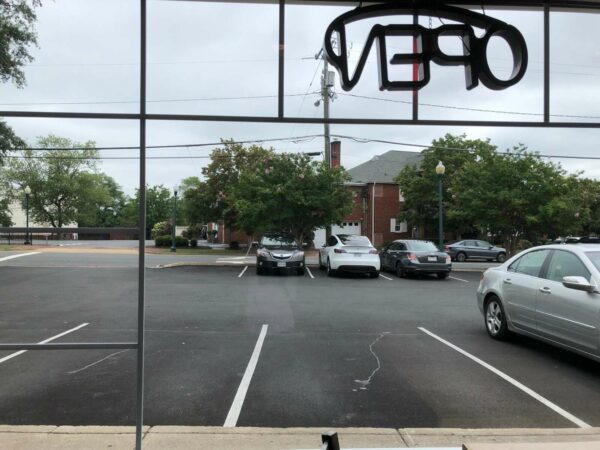 Tysons Wegmans Reopens After Hazmat Event — The Wegmans at Capital One Center (1835 Capital One Drive) was closed throughout the night on Wednesday (Sept. 22), a tipster who told Tysons Reporter, adding that there were “lots of fire trucks outside.” The Fairfax County Fire and Rescue Department says one of the store’s refrigerator lines had a leak, which “is considered a HAZMAT incident.” The scene was cleared that evening, and the store reopened yesterday (Thursday).

Falls Church Development to Delay Traffic Tomorrow — “Drivers should expect delays at the intersection of Broad St. (Rt. 7/Leesburg Pike) and Washington St. (Rt. 29/Lee Highway) on Saturday, September 25, from 8:30 a.m. to 3:30 p.m. The traffic signal at that intersection is expected to be dark, and lanes will be closed…The closures are due to a contractor testing for the upcoming Broad and Washington private development project at the intersection.” [City of Falls Church]

Watch Demolition of Old NADA HQ in Tysons — Have a few free hours? Spend them watching the vacated National Automobile Dealers Association headquarters get reduced to rubble to make way for The Boro’s expansion. Demolition work is nearly complete on the building, which was among the first office towers in Tysons when it was constructed in 1975. [Fairfax County Economic Development Authority]

1st Stage Theater Reflects on Staying Busy During Pandemic — “Instead of shutting down and laying off workers, 1st Stage took a different tack. The company committed to fulfilling every contract for three scheduled productions, keeping its entire staff employed and continuing to function at the fullest capacity possible under the circumstances, [artistic and managing director Alex] Levy said.” [Sun Gazette/Inside NoVA]

The McLean Citizens Association has thrown its support behind a planned expansion of The Boro after working with the developer to make adjustments to the project, which will replace the former NADA headquarters site in Tysons.

The volunteer group’s board of directors passed a resolution during a virtual meeting on Wednesday (Sept. 1), noting that developer The Meridian Group made changes to its plans that would appease the association as well as neighbors at The Rotonda Condominiums.

Doolittle said his association has been impressed with Meridian making adjustments to concerns they’ve shared.

The Rotonda Condo association hired a traffic consultant and land-use attorney and has met with the developer some eight or 10 times over the last year to address issues ranging from construction to visual impacts.

For example, a building slated to become a pharmacy won’t have windows in a rear area, so the developer arranged to have vegetation and a mural on the wall, Doolittle said.

When crews began tearing down the NADA building last week, the association sent an email to Meridian Vice President Tom Boylan, and the next day, the company had water sprayers on the site to address dust issues.

MCA board member Bob Perito reported that the citizens’ group, which bills itself as the “unofficial town hall” of the greater McLean area, had a similar experience with the developer regarding interactions with its Planning and Zoning Committee.

“The applicants…responded to detailed, written questions from the P&Z, and they modified the projects in response to some of the committee’s suggestions,” said Perito, who represents The Hamptons of McLean Townhome Association.

Meridian is scheduled to deliver a presentation to The Rotunda residents on Sept. 9. While the condo association has given regular progress updates, the meeting will give residents a chance to learn about the project firsthand. It will also be available to Rotunda residents via Zoom.

“This would be the residents’ first chance to really talk with Meridian,” Doolittle said.

Doolittle said he thinks making these requests during the planning process is a more effective way to push for meaningful change than waiting for a Fairfax County Planning Commission or Board of Supervisors public hearing.

The project builds off The Boro, which debuted in 2019 with luxury high rises, an office-and-retail building called Boro Tower, restaurants, and a 70,000-square-foot Whole Foods. The grocery store alone is the size of just over 1.2 football fields.

MCA’s resolution highlights the money for schools and a recreational field in Tysons that are included in the project’s proffers, though at-large board member Martin Smith noted that a developer contribution rate for multifamily residential units assumes there’s one kindergarten through 12th grade student per nine households.

According to the resolution, Meridian’s school contribution would amount to “$12,262 per expected student” based on varying ratios for the different kinds of residential units in the new buildings.

“That really seems low,” Smith said of the proposed rate of 0.112 students per unit for multifamily residences, wondering more about how the methodology of such contributions work.

The project will head before the Planning Commission on Oct. 6 and before the Board of Supervisors on Oct. 19.