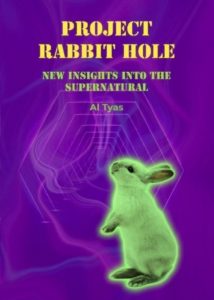 Tyas recently published his second book “Project Rabbit Hole.” The book delves into how and why people have a fascination with ghosts “now more than ever before,” as Tyas put it — thanks in part to increasing pop culture references.

Originally from Rhode Island, Tyas said that he saw his first ghost when he was 7 while at an amusement park. He moved to Falls Church in 2007 and now lives in Alexandria.

After moving to the D.C. area, he joined a paranormal ghost group — “at first it was cute” — and then five years later, he branched off and made his own group, DC Metro Area Ghost Watchers.

In the height of his ghost hunting days, Tyas said he would conduct two investigations per week — everything from people claiming they were possessed to reports of strange noises or occurrences in people’s homes.

Eventually, Tyas handed off his group to another person after the experiences got “darker and darker” and he noticed his and fellow ghost hunters’ health start to decline.

What are ghosts? “Ghosts are demented, dysfunctional beings that died before their time and at the height of their lives,” he said, adding that the ghost might not even know that they are dead.

Most people think they have a ghost when they feel cold spots, hear a voice or notice that objects are missing, he said. Yet Tyas said that he approached investigations at first with skepticism, since some people claim to see ghosts for short-term fame and attention.

“Not everything people see or experience are ghosts,” he said.

This isn’t Tyas’ first time writing a book. He published “Last Call on the Potomac” — a book about D.C. area ghost stories — in 2006.

For his new book, Tyas drew on his personal experiences as a retired paranormal investigator, research and interviews for an in-depth look at the “supernatural family” — from ghosts to aliens. The paperback book costs $17 on Lulu.

Last year, Tyas headed down to New Orleans to do research on how people have interacted with supernatural beings throughout history. In his research, he noted that changes starting with the Fox sisters, who became mediums in the 1850s but later admitted to faking some parts of their seances.

For people looking for ghosts, Tyas shared some words of warning.

“[Ghosts] always appear when you least expect them to,” Tyas said, adding that they tend to pick the weakest person to bother.

Ultimately, Tyas said that coexistence is the goal and that people should leave supernatural beings alone.