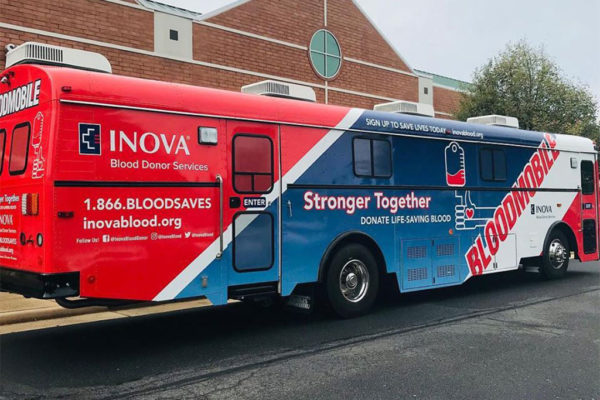 The Tysons area will have three blood drives this month via a partnership with local volunteer fire departments and Inova Blood Donor Services.

“Due to current events, blood supplies in Fairfax County and the nation are at dangerously low levels and dropping,” according to the fire department.

Here are the Tysons-area ones:

There will also be a blood drive at Station 5 (6300 Beulah Street) in Alexandria on Thursday (June 18) from 1-7 p.m. People can register on the Inova Blood Donor Services website.

Fairfax County Fire and Rescue noted how the blood drives will address safety concerns with COVID-19.

“There will be plenty of space to spread out and use appropriate social distancing,” the post said. “To help protect our firefighters and paramedics, access to the fire station is prohibited.”

(Updated at 9:30 a.m.) Despite some dramatic photos, no one was injured in a fiery crash around 5 a.m. this morning (Tuesday) on the 8500 block of Georgetown Pike.

The single-vehicle crash happened just west of the entrance to the Madeira School and south of Great Falls Park. The car involved caught fire shortly after the collision, but its driver — the only person inside — was able to get out.

According to Fairfax County Fire and Rescue, units from McLean, Great Falls, and Wolf Trap all responded to the crash and were able to quickly extinguish the fire.

(Updated 10:45 a.m.) — Lieutenant Eddie Payne, a firefighter at Station 1 in McLean, was recognized by the Sons of the American Revolution’s George Washington Chapter on Monday, Oct. 15 with a Fire Safety Award for his role in a dramatic rescue this summer.

On June 20, the Beltway came to a standstill as a tractor-trailer driver crashed into construction vehicles working on the Woodrow Wilson Bridge. The driver was killed and four of the vehicles caught fire, closing the bridge and clouding the sky with smoke.

Three construction workers were in a bucket under the bridge, attached to a boom truck that was caught in the accident, and were trapped as several local fire departments worked together with boat crews to rescue them.

Payne was off-duty at the time but stepped in to help coordinate the rescue of the workers. Bill Delaney, a public affairs officer for Fairfax County Fire and Rescue, said Payne happened to see the chaos and was one of the first to try to get everyone organized.

“He called it in and was in communications with the 911 center to let them know what they were coming into,” said Delaney. “He was helping to coordinate what was going on while he was off-duty.”

Firefighters from Fairfax Station 11 near Alexandria and stations in Washington, D.C. and Prince George’s County also received awards for their efforts.

“He took control of a very chaotic scene and kept a level head,” said the Fairfax County Fire and Rescue Department in a Facebook post.