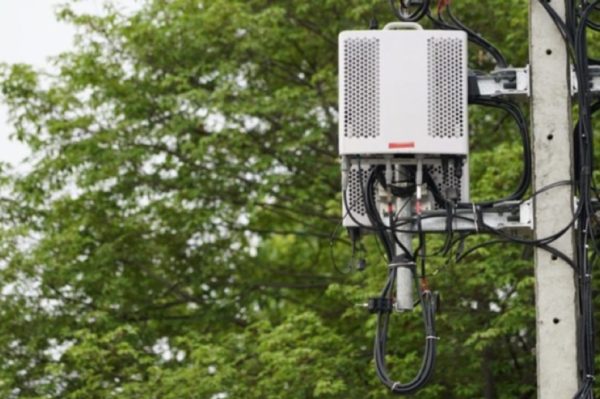 The future of 5G in Falls Church is unclear.

The new service offers cell phone users faster speeds but is not yet available in the City of Falls Church.

Karen Jones is a member of the Falls Church Tree Commission who prepared a city plan for how to implement the new service. Though she began her research out of concerns for tree preservation, she said her research guided her down another concerning path.

She found that in order to bring 5G services to the city, telecommunication companies would likely install transmitters  — roughly the size of a child’s backpack — on already existing infrastructure like telephone polls, streets or powerlines.

“They’re boxy, not attractive typically, and they will be put on streetlights and on the side of buildings,” she said.

The transmitters’ high frequency only reaches so far meaning they would need to be installed every 100 feet, Jones added.

She is urging the city to adopt a 5G policy since telecommunication companies could approach the city any day with a proposal.

According to the Telecommunications Act of 1996, the city has 90 days to approve or reject a plan once the Federal Communications Commission proposes implementation.

If the City of Falls Church already has a plan, Jones said they will be able to have more control over the way 5G is implemented within city limits.

To ease the aesthetic burdens of 5G, Jones spoke with several companies that specialize in covert transmitters.

Ericsson, for example, makes products that allow contractors to hide 5G antennas in the wallpaper or under carpet, according to Jones. She also discussed solutions like hiding 5G antennas under specialized manhole covers.

“There is also a significant amount of research and prototyping on transparent conductive films,” Jones said.

Jones already presented her proposal to the Tree Commission and is going to educate City Council members on the topic in the coming weeks.

“There are mediation measures that need to be considered. They need to consider this now because the FCC has embarked on this unprecedented focus of building out 5G,” Jones said. 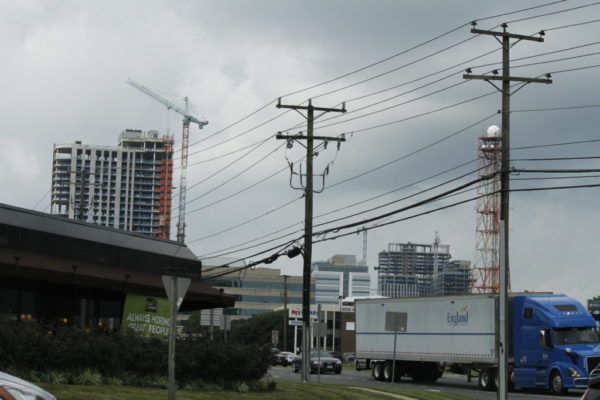 5G is coming to Tysons — sooner or later — but its local rollout is not without challenges.

The next generation of wireless internet technology, which will arrive in Tysons in the next few years, means more than faster Netflix. It means infrastructure, laying the groundwork for innovation and entrepreneurship. It means bringing technology like self-driving cars a step closer to reality.

It also means regulation: it means Fairfax County negotiating with property owners, telecom providers, and the federal government. Tysons is built on a legacy of leadership in network technology, and the path forward relies on wise implementation of wireless technology. The future of “Internet Alley” hangs in the balance.

Mobile internet has changed a lot since 2G technology came along in 1991. Every additional G (for ‘generation’) follows the same trend: speed increases while range drops. Long-gone are the days of a single cellular tower providing a signal for the entire city. Today’s 4G technology relies on a network of smaller nodes, often located on top of buildings, that each cover a neighborhood. Tomorrow’s 5G nodes, with speeds up to twenty times faster, will probably have a range between 250 and 2000 feet. Fortunately, these will be “small cells”: maybe as large as a thirty-foot tower or as small as a backpack attached to a streetlight that’s already there.

5G’s higher speeds will be critical for Tysons moving forward. With much of the area’s historical success and present industry built on network technology, internet connection is as important here as was coal to the cities of the Industrial Revolution.

The new technology will be particularly important for self-driving cars, often called autonomous vehicles or AVs. Full automation will require that an AV is always connected to the internet, at reliably high speeds, so it can communicate with other AVs on the road. Only then will the full potential of the technology be unleashed. Tysons is heavily reliant on cars for transportation and Fairfax is “trying to become a capital of driverless cars,” so it is clear that AVs and 5G will play a transformative role for ‘America’s Next Great City.’ 5G will also be important for “Internet of Things” technologies like cashier-free retail and augmented reality.

Tysons faces unique and formidable challenges in implementing 5G. These challenges arise from the combination of 5G’s limited range with Tysons’ unusual physical and legal environments.

Where should 5G small cells be located? The first half of the question is physical. In traditional cities like Washington, we can attach them to existing streetlights on every block where they’ll cover traffic on the streets as well as people using mobile devices on the sidewalk or in parks, shops, and cafes. But Tysons doesn’t really have blocks. Here, a cell at the side of the road might not be strong enough to reach all the way through the parking lot to the building behind it. Here, the 495-123 interchange is almost 1,000 feet wide — it alone might need several cells.

Although Tysons is working hard to be more pedestrian-friendly, most people walking in the area are still inside buildings. Because 5G signal can’t easily penetrate walls, that means that our malls, parking garages, and big-box stores might only get reception if the cells are actually indoors with the shoppers.

Solving those technical issues will be difficult enough, but on the legal side of things the problems really get thorny.

Many of Tysons’ streets, along with its enormous buildings and parking garages, are privately-owned. This means it will be difficult for Fairfax County to coordinate a unified system that covers the entire area. The wide variety of private landowners will each bring their own desires to the table, but for the 5G network to be really useful it will have to be unified. To imagine what an inconsistent network might mean, think about an autonomous vehicle that drives itself off the highway ramp only to abruptly switch back to manual control when it enters a private street. To imagine a consistent one, think about placing an HD video call from your seat on the Metro and the connection not missing a beat as you disembark and walk to your favorite shop inside the mall.

To make the situation even stickier, Fairfax will be handling all of these negotiations with one hand tied behind its back. The FCC recently released a set of regulations dictating that local governments will only have 90 days to approve or deny small-cell installation applications, restricting environmental approval processes, and limiting the fees that can be charged to a service provider. 90 days is the blink of an eye for regulators, meaning that Fairfax will have to have a well-made plan ready before the first installation applications appear.

5G is coming quick. It could arrive as soon as next year, though probably not soon enough that you should upgrade your phone yet. However, if we hurry to bring 5G to Tysons, we might ignore the complexity of the issue and get the rollout wrong.

Early-adoption 5G might provide an advantage in the short term that turns into a long-term obstacle when the system is too established to change. We might be better off if we take our time and avoid other communities’ mistakes. Internet connectivity is important here, but it’s more important to get it right than to get it fast.