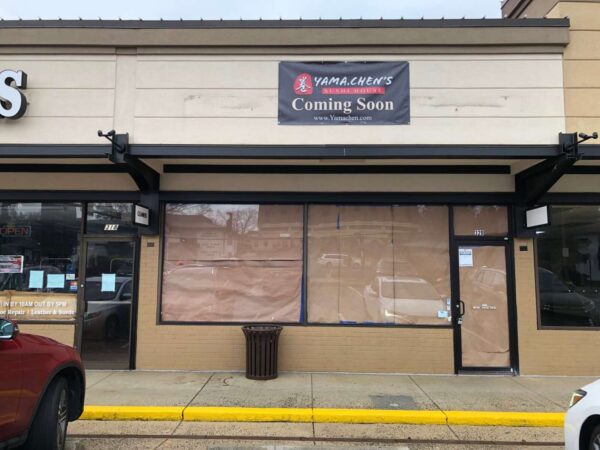 The family behind YamaChen’s Sushi House would’ve preferred to open their new Vienna location sooner, but thanks to the COVID-19 pandemic, later will have to do.

As noted by Patch in December, the Japanese restaurant is moving into 320 Maple Avenue West, taking over a 1,500 square-foot space at Vienna Plaza Shopping Center previously filled by Jersey Mike’s Subs.

YamaChen owner Si Chen told Tysons Reporter last week that they were supposed to open in December, but construction has taken longer than anticipated, as the pandemic continues to disrupt global supply chains.

“The pandemic has definitely slowed down the process a lot,” she said, adding that she hopes to open around the end of February.

Primarily based in Virginia Beach and Hampton Roads, YamaChen began in 2003 as a “hole in the wall” with just four tables but is now looking to expand nationwide, its website says.

The Vienna site will be the chain’s 14th restaurant overall and its third in Northern Virginia after one opened in Fairfax City in October 2020. A Sterling location is also still in the works.

“It’s a very pretty, little town,” Chen said when asked about the team’s interest in Vienna.

YamaChen will join the town’s growing array of options for Japanese cuisine, including Sushi Yoshi on Church Street, Sweet Ginger in Danor Plaza, and Sushi Yama, which is located in the adjacent shopping center. The most recent addition, Sushi Koji, opened at Cedar Park Shopping Center in December.

Chen says her family’s restaurants are distinguished by the special sushi recipes they use, developed by chef Andy Chen.

YamaChen emphasizes freshness with its seafood providers and a welcoming atmosphere for diners, according to its website. The chain also makes its own sauces in house.

A change in Virginia law will allow police to once again pull over vehicles with excessively loud exhaust systems, starting tomorrow (Friday). At a Fairfax County Board of Supervisors meeting…

The Fairfax County Park Authority’s annual Summer Entertainment Series is back, and this time, West Falls Church has been invited to the party. The inaugural Global Music & Dance program…