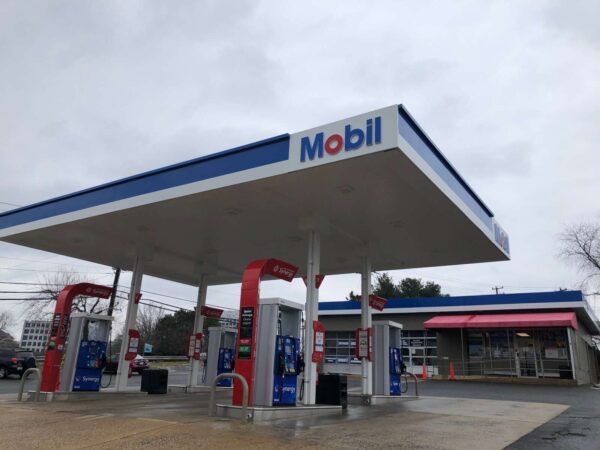 The Mobil gas station on Route 123 by Tysons Corner Center is getting a touch-up for the 21st century.

With a special exception application submitted to the Fairfax County Department of Planning and Zoning on Jan. 10, Petroleum Marketing Group has proposed eliminating the station’s car wash and repair bays and replacing them with a convenience store.

While the store won’t be as extensive as a Wawa or Sheetz, it will offer coffee, doughnuts, and a variety of prepared food for customers looking to grab a snack while filling up their gas tank, development director Armand Keurian told Tysons Reporter.

“We just want a use that’s more conducive in today’s environment with a gas station, and as you can see, convenience stores and gas stations go together today,” Keurian said.

The conversion is part of a larger effort to upgrade the property at 1955 Chain Bridge Road that has been underway since PMG took control of the lease last year. So far, the company has rebranded the former Gulf gas station and installed a new canopy and fuel pumps.

Adjacent to a Sunoco, the Mobil station has eight fuel pumps and a 2,585 square-foot service building originally built in 1969. There are three vehicle service bays, a small snack shop, and a car wash that is no longer operational.

The convenience store will expand the snack shop to the entire one-story building, taking over the space currently occupied by the car wash and vehicle bays, which Keurian says “are really not being used to their full extent.”

According to PMG’s statement of justification to the county, the convenience store will employ eight workers total. It will have merchandise and display areas, a wall of refrigerated drinks, a restroom, and an employee workroom.

Space on the site’s southeast corner will be reserved for a possible future electric vehicle charging station.

PMG estimates that the redevelopment will increase travel to the site from 700 to 800 trips per day. While the majority of visitors are expected to be drivers, the company says it will make some safety improvements, including realigning and widening the existing sidewalk on Route 123 to 6 feet.

A side road parallel to Route 123 that connects the Mobil and Sunoco gas stations will also be closed off to “reduce vehicle conflicts,” the application says.

“The county’s asking for some pedestrian upgrades for their wants and needs,” Keurian said. “…They’re concerned about the walkability and safety. We’re all about safety too, so we’re amenable to their desires.”

In the statement of justification, PMG acknowledges that the gas station and convenience store will be an interim use until the site is fully redeveloped in accordance with the Tysons Comprehensive Plan, which currently designates it as retail mixed-use.

“This proposal is a unique opportunity to allow a long-standing business to adapt to changing market conditions in order to continue serving the surrounding community,” land-use attorney David Gill, who is representing PMG, wrote in the statement. “The proposal will provide a convenience store use that will serve the needs of motorists, while improving the traffic operations, safety, and ADA compliant pedestrian experience along this portion of Chain Bridge Road.”