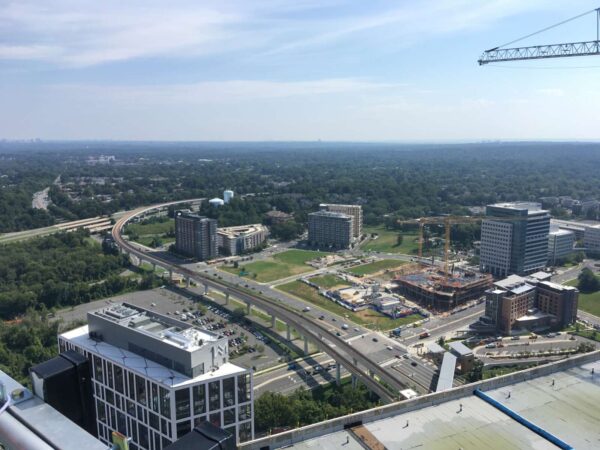 Fairfax County’s growth has come with deadly and dangerous roads for pedestrians, congestion for drivers, and other consequences that planning leaders hope to reverse.

At a Tysons committee meeting on Thursday (Dec. 9), the Fairfax County Planning Commission cited downtown Falls Church, Merrifield’s Mosaic District, and Reston Town Center as examples of what developers and governments should strive to make: mixed-use communities where people can live, shop, work, and play.

Deputy County Executive Rachel Flynn said the emergence of major thoroughfares, shopping meccas, and other projects have dramatically changed how pedestrians interact with streets, which were increasingly built with the goal of getting vehicles from point A to point B as quickly as possible.

“We shifted how we built…our roads,” she said, noting how 100 years ago, pedestrians shared roads with bicycles, horses, streetcars, and automobiles, and speed limits were about the same pace as pedestrians themselves.

She said streets used to be considered “owned” by everyone, used for everything from a marketplace for businesses to playground for kids.

“Everybody got to use the street equally,” she said.

Mixed-use projects like Reston Town Center and the Mosaic District present an alternate path forward that more consciously balances the needs of different road users, Flynn said, pointing to The Boro in Tysons, Comstock’s Reston Station, and the upcoming Halley Rise complex in Reston as other examples.

“Whenever you see people just walking in the street, you know you’ve a great street. You know it’s safe,” Flynn said.

Suggesting their walkability is closer to what might be seen in a city, she said these projects have proven successful for developers and the public, creating places where people want to live as well as destinations.

However, with lower parking requirements and other measures aimed at reducing vehicles, such projects haven’t always come with community support. The pending Campus Commons redevelopment caused an uproar over congestion at Wiehle Avenue and ultimately included changes to accommodate concerns.

The Fairfax County Board of Supervisors also recently approved an expansion of The Boro that some feel lacks sufficient accessibility accommodations and traffic controls, particularly across Westpark and Greensboro drives.

How We Got Here

Fairfax County’s road network is hardly alone in privileging cars, with everyone else as an afterthought.

With the rise of mass-produced vehicles, the automobile industry campaigned to change how streets were used and designed. Lobby groups pushed the term jaywalker to shift blame for crashes onto pedestrians, and the rise of highways and sprawling suburbs in the mid-20th century — not to mention some conspiring by oil and car companies like General Motors and Standard Oil — led to the demise of rail-based transit systems.

As time went on, regions across the country expanded lanes to allow more vehicles to travel, but as the D.C. region knows all too well, those changes can have the opposite effect, accommodating congestion that brings traffic to a stop.

Flynn noted that 71% of people drive alone to work in Fairfax County — a number she says the county should “get down to 50%” by including multimodal improvements in road and development projects.

“We’re not going to widen our way out of this,” she said.

What Could Happen Next

To establish a more comprehensive vision for walking, bicycling, and other non-motorized forms of travel, the county started developing an ActiveFairfax Transportation Plan last year.

Expected to be completed at the end of 2022, the project incorporates a “Complete Streets” concept that emphasizes safety and mobility for all road users and prompted the creation of a Safe Streets for All initiative.

Some options for improving street safety in dense population centers like Tysons and Reston include slowing speeds between 25 to 35 mph, limiting certain roads to six thru-lanes, adding on-street parking, and pursuing other ways to calm traffic, Flynn said.

She wants the county to make “beautiful boulevards,” not “car sewers.” Addressing I-95 congestion and the use of Route 1 in the Lorton area to bypass problems, Flynn suggested the county could rethink how to discourage cut-through traffic.

“We’d be glad to have you,” she said. “You can come here, but it’s going to take you a little longer and this is our main street. This is not our 95 anymore.”

Planning Commission representatives expressed their support for a less car-centered mindset, saying they would like involve the Virginia Department of Transportation and other organizations in discussions.

With fatal crashes, merchants losing business, and limited space for development, several cities have shifted away from the volume-based metric are highlighting another model: reducing vehicle miles traveled.

Flynn also suggested infrastructure improvements can help create a sense of place and show people “we care about you,” praising the presence and beauty of the Arlington Memorial Bridge.