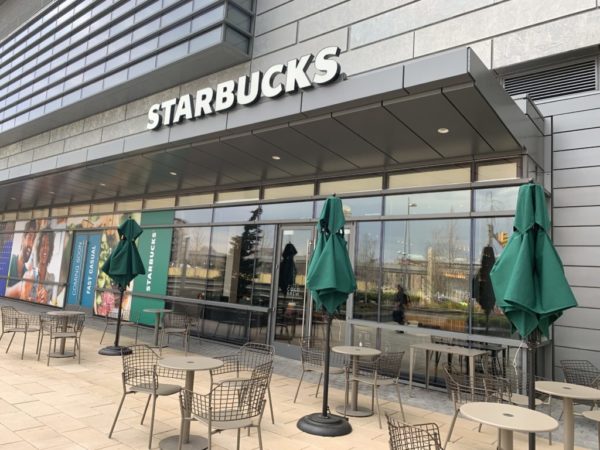 Starbucks will not reopen at the Capital One headquarters in Tysons.

The coffee shop at 1610 Capital One Drive North has been closed for much of the past year during the COVID-19 pandemic, but the exact timing of the decision to keep it closed isn’t entirely clear.

After the location reopened in the second half of 2020, an anonymous tipster alerted Tysons Reporter on June 20 that it had closed again.

“Due to limited office occupancy during the COVID pandemic, Starbucks has temporarily closed this location but plans to re-open this location in the near future,” a spokesperson for Capital One Center, the surrounding mixed-use development, told Tysons Reporter at that time.

However, in an emailed statement, the Starbucks media relations team now tells Tysons Reporter that the company’s last day at Capital One was back on March 23:

As part of Starbucks standard course of business, we continually evaluate our business to ensure a healthy store portfolio. After careful consideration, we determined it was best to close the store at 1610 Capital One Drive North in McLean, VA. Our last day at this location was March 23, 2021.

As difficult as this was, we must make the right business decisions for the sake of Starbucks long-term growth. All Starbucks partners (employees) working at that store had the opportunity to transfer to one of our nearby locations.

We look forward to continuing to serve the McLean community and encourage our customers to visit us at our other stores in the area.

Starbucks opened at the Capital One building in March 2019, quickly becoming a regular haunt for the financial corporation’s employees.

The location is still listed as open on Yelp, where reviewers compliment the staff for their friendliness and level of service.

The Starbucks store locator includes a shop at 1680 Capital One Drive that also appears on Google Maps, but the listed phone number has been disconnected.

Tysons East still has a Starbucks in the Safeway on Colshire Drive, and there are seven other locations in Tysons overall, though one of the two shops in Tysons Corner Center remains temporarily closed.