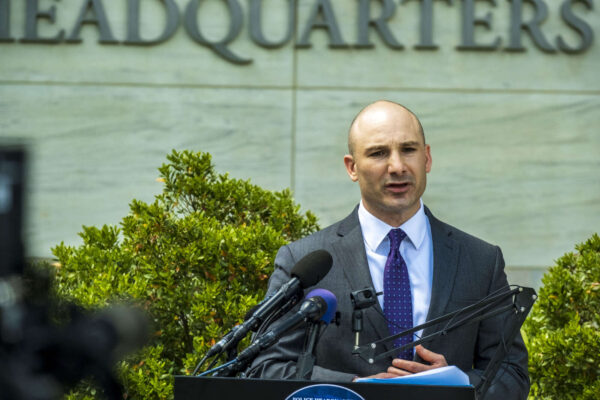 The results of Virginia’s 2021 general election could have significant ramifications for local efforts to seek alternatives to jail and other criminal justice reforms, Fairfax County Commonwealth’s Attorney Steve Descano says.

Descano, a Democrat, addressed expectations that his agenda will clash with that of Republican Attorney General-elect Jason Miyares in an online event on Tuesday (Nov. 16) hosted by the McLean chapter of the American Association of University Women, which seeks to promote equity and education for women and girls.

A day after defeating incumbent Mark Herring, who was seeking a third consecutive term as Virginia’s top legal officer, Miyares told reporters on Nov. 3 that he plans to introduce a bill that would let the state intervene in local cases.

“This legislation was inspired by a child rape case in Fairfax County, where a defendant was charged with repeatedly raping and molesting a 5-year-old child and was eligible for a life sentence,” Miyares said in a statement to FFXnow, pointing to a case involving Oscar R. Zaldivar, 53, who received a 17-year sentence through a plea deal.

Despite objections from the families involved, Descano’s office defended the sentence in statements to media after the September hearing as longer than what 75% of defendants in Virginia face for the same offenses.

Prosecutors typically get discretion to determine when to pursue a case based on whether the available evidence is sufficient and other factors. Descano said Miyares’s proposal would turn the legal system on its head.

“He wants the police to be able to sideline a prosecutor who’s inconvenient for them at anytime,” Descano said, adding that Fairfax County is fortunate to have a professionalized police force.

Miyares countered that he would get guidance from Commonwealth’s Attorneys to advocate for a bill that would “invite” the attorney general to prosecute child rape or violent crime cases “when the local prosecutor refuses to prosecute.”

The clash between Descano and Miyares presages the uphill battle that Fairfax County’s mostly Democratic elected officials will likely face over the next few years in trying to work with the n0w-Republican-led state government.

The county started a veterans court in 2015 to provide support systems for service members faced with charges. It then launched a Diversion First initiative in 2016 that offers rehabilitation over incarceration for certain nonviolent offenses. Since then, the county has also created specialized court dockets focused on the needs of people with drug addiction and mental health issues.

According to Census data compiled by the nonprofit The Marshall Project, Fairfax County’s jail population has declined significantly over the past two decades, from 3,749 people in 2000 to 1,207 people in 2010 and 667 people in 2020.

Elected in 2019 amid a progressive surge in Northern Virginia, Descano has implemented many of his pledged reforms, including eliminating cash bail, not holding suspects on nonviolent charges when they aren’t deemed a danger to the community, and enabling prosecutors to take “community values” into account instead of deferring to judges.

He said on Tuesday that the changes are intended to improve fairness in prosecutions.

The Office of the Commonwealth’s Attorney also has a data director who is working with researchers from American University and other partners to create a public dashboard with information on how it handles different cases.

Descano says the data will allow for analysis of prosecutors’ decisions, which will help avoid problems, such as unfair treatment based on gender or race.

When asked about the data effort by Aroona Borpujari, a statistician who watched the event, Descano replied that his office will release the data when they have enough of a sample size.

“It’s our pledge that we’re going to be transparent,” he said, describing the office as previously being in the Stone Age.