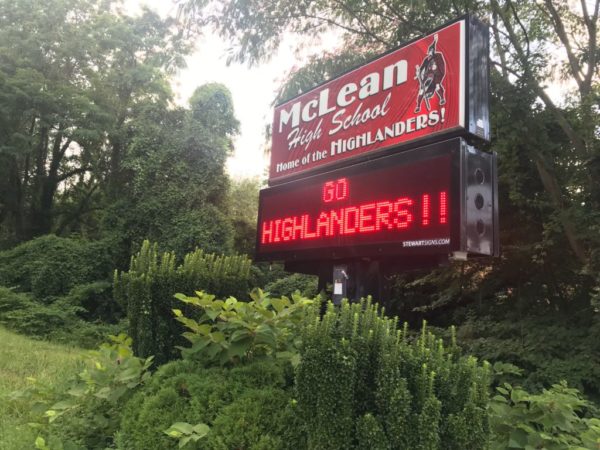 McLean High School will undergo another summer of construction next year after the Fairfax County School Board approved a second contract for its roof replacement project Thursday night (Nov. 11).

The school board awarded an $881,780 contract to the construction company R.D. Bean, which also tackled the first phase of the project this past summer.

“The insulation, covering, and waterproofing roofing system also utilizes high energy-efficient materials that reflect the sun’s harmful rays and actually lowers the roof temperature, leading to a longer roof life,” Tholen said at the meeting after the contract was approved as part of the board’s consent agenda.

Built in 1997 with some additions installed in 2001, the existing McLean High School roof was nearing the end of its life cycle, according to Tholen.

Fairfax County Public Schools previously told Tysons Reporter that the new roof is being constructed in phases across four summers while students are out of school.

Work on the second phase is scheduled to start in June and be finished by September 2022.

“I am excited to see this needed building improvement at McLean High School,” Tholen said by email. “Along with my colleague, Karl Frisch, Providence School Board Representative, I am closely monitoring the capacity of McLean HS and all of our Tysons area high schools to determine the future capacity needs of those buildings.”

She notes that the project does not preclude FCPS from pursuing any future plans for renovation or capacity enhancement efforts at McLean High School, though no capital improvement projects are currently in the works for that particular school.

McLean High School has been over capacity since the 2011-2012 school year, according to FCPS’ adopted capital improvement program for fiscal years 2022-2026.

To alleviate crowding, FCPS replaced some of the 22 trailers at the school with a modular addition. The facility has 12 classrooms and bathrooms and is now in use for the 2021-2022 school year.

“The modular addition improved the current educational and facility conditions at McLean HS and did provide some capacity relief by providing bathrooms for both students and teachers within the modular,” Tholen said. “This has eliminated the need for students in those classes to walk to the building in order to access a bathroom, as was the case previously with the temporary classrooms.”

FCPS has not calculated the school’s current capacity utilization yet, but after dipping from 2,350 students in 2019-2020 to 2,292 students last year, McLean High School’s enrollment has climbed back up to 2,361 students, as of October.

In addition to introducing the modular, the school board sought to address crowding issues by approving a boundary adjustment in February that shifted some students to the Langley High School pyramid, starting with this year’s new ninth graders.

However, the full impact of that change won’t become clear until the 2025-2026 school year, when all grades will be fully phased in according to the new alignment, Tholen says.