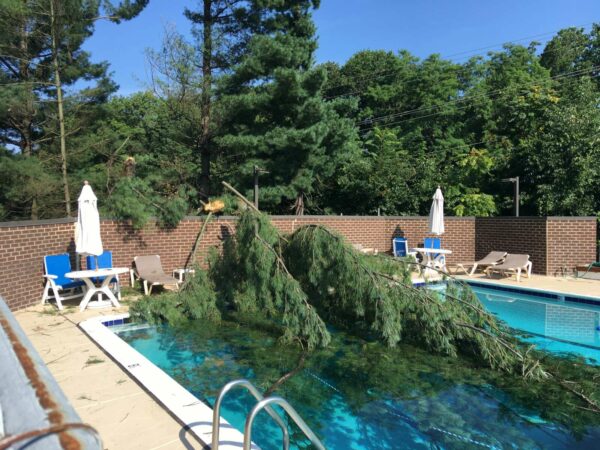 Flooding, power outages, and other impacts from storms are among the top climate change-related concerns for Fairfax County residents, the recently released results of a county survey suggest.

606 community members participated in the survey that the Fairfax County Office of Environmental and Energy Coordination (OEEC) conducted between June 8 and July 2 as part of its Resilient Fairfax initiative, which will produce a plan for how the county can withstand and adapt to the threats introduced by a warming planet.

81% of respondents cited severe storms as a concern, followed by changing temperatures (79%) and flooding (60%), according to the survey results report published on Nov. 8.

55% of respondents said they’re concerned about drought, 40% about fire risks, and 19% listed other climate hazards, including air quality and pollution, health effects, and the impact on plants and animals.

While the survey drew responses from just a fraction of the 1.1 million people who live in Fairfax County, the results still offer insight into the community’s awareness of the risks posed by climate change — and how they are already affecting people’s lives, county staff say.

“It helps us gather information that’s not available through quantitative data that we have,” OEEC Senior Planner Allison Homer said. “People’s opinions or people’s concerns, that’s not something we have access to without asking.”

24.6% of the Fairfax County residents who answered the survey said their neighborhood has flooded within the past five years, with 9.8% of residents saying it has affected their home.

“I think it’s sort of biased towards the areas where people lived that are taking the survey,” she said. “Our most flood-prone roads in reality are mostly concentrated towards the eastern part of the county.”

Flood risks tend to be higher in areas with older infrastructure, according to OEEC Division Manager Matt Meyers, citing the Great Falls area as an example.

“Those were country road when they were first built, but now, they’re surrounded by urban development, so those road culverts were not designed to today’s standards,” Meyers said. “They’re already inadequate, and then, when we have these intense rainfalls, they’re just overwhelmed.”

A sizable 80.7% of survey respondents reported experiencing storm damage other than flooding — such as power outages, damage to infrastructure and buildings, and downed trees — in their neighborhood within the past five years.

In particular, 94% of respondents said they have lost power in that time frame. While 46% said they were not significantly affected by a power outage, many reported notable ramifications:

Many of the areas cited as vulnerable were the same ones seen as susceptible to flooding, including Richmond Highway, Hunter Mill Road, Lawyers Road, Old Dominion Drive, and Prosperity Avenue.

The fragility of the power grid is an issue nationwide, as illustrated by extreme weather from a winter storm in Texas to this summer’s Pacific Northwest heat wave.

Homer says the county government can help reinforce Fairfax County’s power system by investing in backup generators, for example, but many changes, like moving power lines underground, will require cooperation from the state and utilty companies, which are involved in Reslient Fairfax as part of its Infrastructure Advisory Group.

“Renewable energy like solar installations can help enhance resilience if they’re paired with storage,” Homer said. “…But there are some limitations in Virginia as far as [how] we can use that solar plus storage, so we’re trying to see how much we can do that’s within our power to do.”

The Climate Adaptation and Resilience Plan

The survey is just one part of the Climate Adaptation and Resilience Plan that OEEC expects to finalize for the Fairfax County Board of Supervisors’ approval in June 2022.

In the coming months, county staff will release a climate projections report forecasting temperatures, precipitation levels, and other future conditions. They’re also developing a vulnerability and risk assessment that will incorporate feedback from the survey and an audit of the county’s existing policies and programs to determine where updates might be needed.

The final piece of the initiative will be a roadmap for how the county can implement its strategies for climate resilience.

Since launching in April, Resilient Fairfax has held two public meetings, and Homer says another community survey is planned for January. There will be a public comment period after a draft of the resilience plan is released in April.

The initiative works with the Community-wide Energy and Climate Action Plan that the Board of Supervisors adopted in September, which recommends steps for reducing greenhouse gas emissions.

One of the Resilient Fairfax team’s goals is to identify strategies that can address both the causes and effects of climate change.

“Resilient Fairfax is acknowledging that we’re already facing impacts from climate change,” Homer said. “We’re already facing more severe storms and flooding and heat, so while we’re all working to reduce our emissions, we also need to make sure that we’re prepared for the impacts at the same time.”

END_OF_DOCUMENT_TOKEN_TO_BE_REPLACED

More Stories
UPDATE: Wolftrap Elementary evacuated due to smoke but no fire foundFood trucks incoming: Crane lifts double-decker bus and more to The Perch at Capital One Center