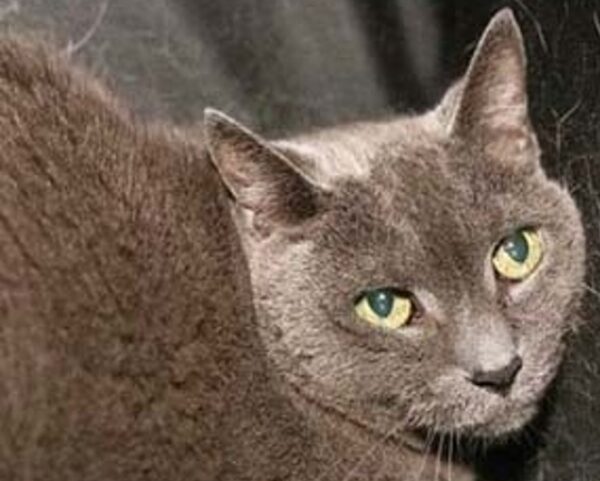 Meet London, an older domestic short-haired cat who has spent his whole life tied at the paw to his three siblings.

After their owner’s unexpected death, London and his littermates found their way to the 4Paws Rescue Team, which has plenty of praise for him:

London is a sweet senior boy who came to 4Paws when his owner unexpectedly passed away. He lived indoors all his life, sharing his household with his caring owner and his siblings Lacey, Koz and Nev. He and his littermates were rescued from a stray mother cat.

London has a gentle disposition and looks forward to new beginnings in his new loving and devoted retirement home. He still has a lot of love to give, but, as most senior kitties, he is also just content to chill out, pondering the great mysteries of life he has yet to figure out [like “have I seen that bird species before”?], and watch the world go by without needing constant entertainment and interaction.

Although he lived all his life with his siblings, London is expected to do well a single cat; alternatively, he can be adopted with any of his buddies or into a home with an existing older laid-back cat. He has never lived with dogs before. He would probably do well with older children who understand his need for laid-back attention.

London’s estimated birthdate is 10/07/2009. If London could have a minute of your attention, he would agree with you that a kitten may be an irresistible fur ball of cuteness, but also have you know that senior cats really don’t ask for too much. Indeed, they are content with their daily meals, a few scratches on their head and under their chin, a clean litterbox and a soft spot to nap or fall asleep. Of course, they also want you, because they know that with you in their life, they are safe. London wants you to know that he is ready to reward you with endless gratitude and love for giving him wonderful golden years. He can also join your home as a foster, if you want to learn more about him before considering adopting him, or to give him a loving foster home as he waits for his forever family to pick him up. His heart is telling him that there is one for him out there…… Are you perhaps the family London is thinking about?

London eats both canned and dry food and has good litter box habits. He has tested negative for FIV and Feline Leukemia, has now been updated on his vaccinations, and is microchipped.

Please e-mail us [at [email protected]] if you’re interested in London. Be sure to include your phone number in your message. Please limit inquiries to the Greater Washington, D.C. area except for barn cats.

Could your home be the perfect place for London to retire?