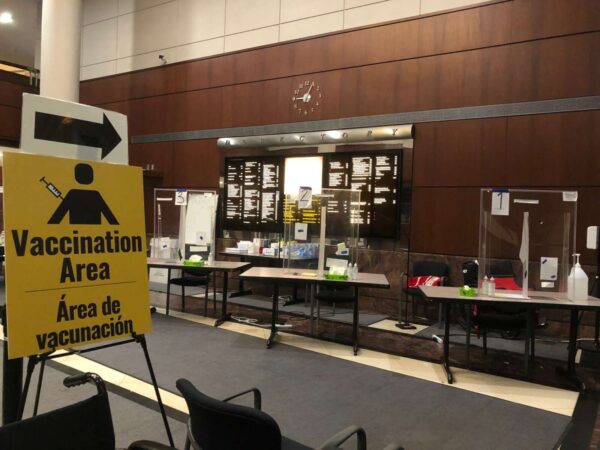 After a grim 2020, a more festive winter holiday season could be in store this year, as Fairfax County’s third COVID-19 wave continues to ebb.

The 57 new cases reported today (Monday) are the fewest that the Fairfax Health District has seen in a single day since July 27, when there were 52 new cases and the Delta variant was just starting to emerge locally.

In fact, the county’s community transmission level has nearly dropped from substantial to moderate for the first time since Aug. 3. Virginia Department of Health data shows that the county saw 50.2 new cases for every 100,000 residents and a 2.3% testing positivity rate during the week of Oct. 24-30.

Using metrics recommended by the Centers for Disease Control and Prevention, VDH defines moderate transmission as 10 to 49 cases per 100,000 people in the past seven days or a positivity rate of 5 to 8%.

The Fairfax Health District, which includes the cities of Falls Church and Fairfax, has recorded a total of 93,373 cases of the novel coronavirus, which has hospitalized 4,373 residents and killed 1,213, according to the Fairfax County Health Department.

Further fueling hope of a relatively risk-free winter is the promise that children could become eligible for COVID-19 vaccinations as soon as this week.

The Food and Drug Administration issued an emergency use authorization allowing children ages 5 to 11 to get the Pfizer-BioNTech vaccine on Friday (Oct. 29), stating that smaller doses than the ones given to adolescents and adults have proven to be safe and effective for the younger age group.

The CDC’s Advisory Committee on Immunization Practices is scheduled to vote on recommendations for pediatric vaccinations tomorrow (Tuesday). Appointments for kids could become available as soon as the CDC gives its approval, according to VDH, which says it has been planning its rollout for months.

“There’s light at the end of this pandemic tunnel sooner rather than later,” Virginia state vaccination liaison Dr. Danny Avula said last week in a statement.

The Fairfax County Health Department says vaccinations will be available through its clinics, pediatric and family medical practices, local pharmacies, and the Tysons Community Vaccination Center for the approximately 97,000 children expected to become eligible in the Fairfax Health District.

In the meantime, the district hit a new vaccination milestone today, with 70.1% of all residents now having received at least one dose — a total of 830,017 people. That includes 82.9% of individuals 18 and older.

According to VDH, 9.2% of Fairfax County residents have gotten booster shots, which are now available to many adults. The county health department is encouraging people who are eligible to get a booster ahead of the holidays, noting that providers may get busy once vaccines roll out to children.