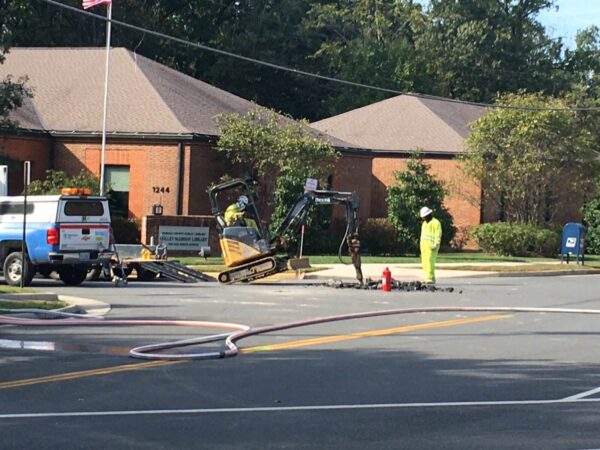 Updated at 4:50 p.m. — The gas leak at Dolley Madison Library has stopped, and all Fairfax County Fire and Rescue units have returned to service, the department has reported.

Washington Gas said in a statement that it discovered a gas line had been damaged by a contractor, but the company was able to stop the flow of gas around 3:30 p.m., and it’s now working to repair the line. There has been no impact to customers other than the library, and service will be restored there after repairs are complete.

Earlier: Dolley Madison Library and the McLean Community Center have been evacuated due to a gas leak at the library, the Fairfax County Fire and Rescue Department says.

Both facilities have been closed, as has a stretch of Ingleside Avenue by Oak Ridge Avenue.

Fire department units are currently on the scene at 1244 Oak Ridge Avenue in McLean. The department says a gas pipeline was struck by workers, but so far, the identity of the workers and the project they were involved with is unclear.

In a 2:33 p.m. update, FCFRD shared that the line is 2 inches in size, and the leak had been stabilized with no injuries reported. Washington Gas has arrived at the scene and is currently working to stop the leak.

MCC says the Old Firehouse Center will still be open for its after school program.

Traffic on Ingleside Avenue by Oak Ridge is being diverted.

FYI #Fairfax: We are sorry to report that our Dolley Madison branch is closed this afternoon due to a facility issue. pic.twitter.com/qrVWmEooXF

David Taube contributed to this report.