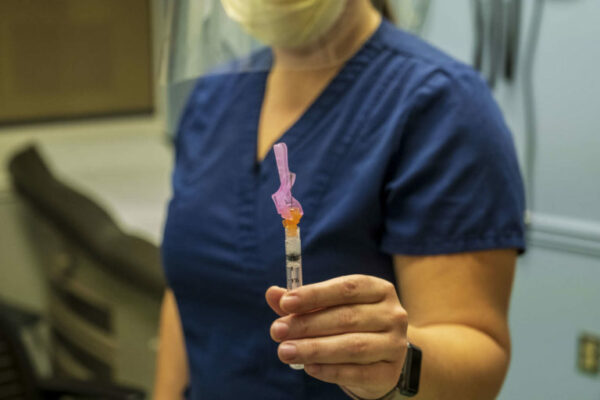 More than four-fifths of adults in the Fairfax Health District have gotten at least one shot of a COVID-19 vaccine, a hard-won milestone achieved after a summer of slowing demand and the arrival of the contagious Delta variant.

According to its vaccine data dashboard, which also includes information from the cities of Fairfax and Falls Church, the Fairfax County Health Department has now administered more than 1.5 million vaccine doses since it received its first shipment on Dec. 23, 2020.

Constituting 68.6% of the total population, 811,460 Fairfax Health District residents, including 81.1% of all people 18 and older, have received at least one vaccine dose.

Interest in getting vaccinated appears to have soared in the past week, as more than 18,000 of those first dose were administered since last Monday (Sept. 13), when the county health department reported that 793,392 residents had received at least one shot. In comparison, just 1,457 first-dose recipients were added between Sept. 7 and 13.

The journey to the 80% benchmark was a two-month grind after the Fairfax Health District surpassed the 70% mark in June — more than 10 days ahead of the July 4 date that federal and state officials had targeted for getting vaccine doses to adults.

The milestone comes as the late summer surge fueled by the Delta variant appears to be leveling off, though Fairfax County’s COVID-19 community transmission levels are still considered high based on the Centers for Disease Control and Prevention’s established metrics.

With another 151 cases reported today (Monday), the Fairfax Health District has recorded a total of 87,621 novel coronavirus infections, which have resulted in 4,266 hospitalizations and 1,173 deaths.

Fairfax County is averaging 80.3 cases per day for the past week after spiking at an average of 204.6 cases over the previous seven days on Thursday (Sept. 16), which was the first time that the weekly average had climbed over 200 since it sat at 204.7 cases on Feb. 27.

Still, VDH data suggests the county is no longer seeing the clear, steep increase in COVID-19 cases that emerged in August. That trend of a sharp rise in cases, followed by a sudden plateau reflects the trajectory that the Delta variant has taken in other countries like India and the U.K.

However, health experts say vaccinations and mitigation measures, like mask-wearing, remain crucial to curtailing the spread of the virus, particularly with schools in session, the weather cooling, and the holiday season approaching.

In the Fairfax Health District, 736,927 residents — 74% of adults and 62.3% of the overall population — have been fully vaccinated, meaning they’ve received two doses of the Pfizer or Moderna vaccine or the one-dose Johnson & Johnson inoculation.

Determining who is considered fully vaccinated could soon become more complicated after Food and Drug Administration advisors voted on Friday (Sept. 17) to recommend booster shots for people who are 65 and older or face high risk of severe illness, though the committee did not support broader approval.

The Virginia Department of Health said in a statement that booster shots won’t be available until the FDA updates its authorization and the CDC issues new guidance, which could come later this week.

“VDH will continue its planning efforts with pharmacies, providers, hospitals and other partners as well as efforts to establish other vaccination sites to ensure that once the CDC issues guidance, eligible Virginians will be able to access a booster dose,” state vaccination coordinator Dr. Danny Avula said.

The Fairfax County Health Department says it is awaiting further federal and state guidance on booster shots and will continue limiting third doses of the Pfizer vaccine to immunocompromised people for now.

In the meantime, the county is also preparing for another game-changing development: the availability of vaccinations for children.

Pfizer reported this morning that initial results from clinical trials suggest its vaccine is safe and effective for children ages 5 to 11. While emergency authorization for that age group isn’t expected to come until later this fall, Fairfax County Public Schools already has plans to work with a third-party company that will help administer the shots to kids once they’re eligible.

The county health department says it is working with the school system and medical providers to prepare to expand vaccinations to children.

“We are in close communication with schools, daycares, and pre-schools — as well as our private medical providers — across Fairfax County about COVID planning and are actively working to prepare and develop options for vaccinating younger children when the vaccine becomes authorized for the 5-11 age group,” FCHD spokesperson Lucy Caldwell said in a statement.