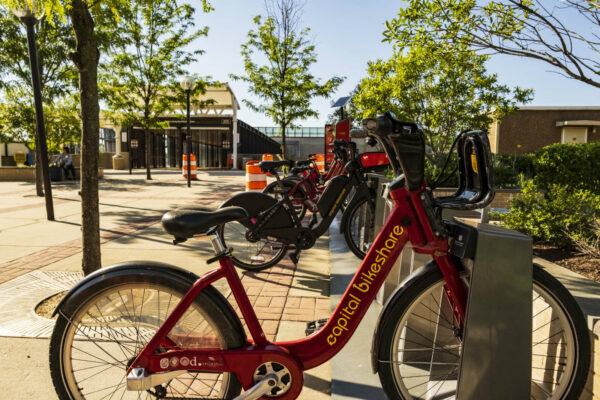 More Capital Bikeshare stations are in the works for the Tysons area, specifically in Merrifield and Vienna.

The Fairfax County Department of Transportation has proposed adding 10 new stations in the following locations, including what would be the bike-sharing service’s first stand at the Vienna Metro station:

The expansion would bring the Tysons area up to 29 Bikeshare stations, including 15 in Tysons and one at the West Falls Church Metro stop. Fairfax County also has 16 stations in Reston, which is getting its own expansion starting in July.

Fairfax County is eager to expand Bikeshare in Merrifield, because the three existing stations that were installed there in 2019 have proven successful, generating some of the most trips per site in the county prior to the COVID-19 pandemic, according to FCDOT spokesperson Robin Geiger.

Vienna has been considered a candidate for Bikeshare since at least 2018, when the county worked with the town, the City of Fairfax, and George Mason University on a feasibility study.

“Plans to expand to the Vienna Metrorail station are underway to provide connectivity to the surrounding community,” Geiger said by email. “The Vienna area stations will also help provide access to the City of Fairfax, who is working to bring CaBi to their part of the region as well.”

While it is not included in Fairfax County’s expansion, Town of Vienna spokesperson Karen Thayer says the Virginia Department of Transportation has granted the town’s request for funding to add Bikeshare stations at multiple locations, including the Town Green and community center.

The total project cost will be $272,400, which covers engineering and design, equipment, and installation.

“We are currently waiting for VDOT to complete its internal process and respond with an agreement,” Thayer said.

For the county project, Geiger says transportation officials looked at a variety of factors when selecting the proposed locations, including the density of development and the potential to generate a lot of trips. The need for bicycling infrastructure is also considered “in an effort to improve transportation equity,” she says.

“On a more granular level, we like to place stations in areas that are already paved — on-street parking lanes are often easy for [installation] and future servicing, and has only a small impact on available car parking,” Geiger wrote, adding that docks typically take up no more than one or two parking spots.

The Merrifield expansion will be primarily funded with a $497,100 I-66 Commuter Choice grant, though that won’t cover the full cost of the project, which Geiger says is currently estimated to be around $600,000.

While Bikeshare usage in the Tysons area consistently rose prior to the pandemic, COVID-19 sank both ridership and membership numbers systemwide as people limited travel and many started working from home.

“At its worst, early in the pandemic membership was around 20% of ridership when compared to past years,” Geiger said by email. “Most of the lost trips were by annual members who were commuting by bicycle.”

Fairfax County saw a 50% decrease in Bikeshare riders in 2020 overall compared to 2019.

Geiger says ridership levels started to pick back up last summer, primarily from non-members, meaning people who were utilizing the service for a single trip or day instead of getting an ongoing subscription.

“Usage patterns systemwide changed as well, with fewer trips to Metro stations, but more to recreational locations, and grocery stores,” she said.