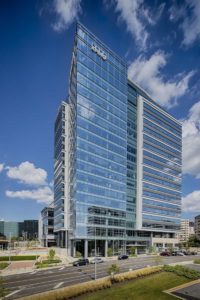 The Boro Tower is going to get a little more crowded in the upcoming months, even as uncertainty persists over the COVID-19 pandemic’s long-term impact on the demand for office space.

The Meridian Group and Rockefeller Group, the developers behind the Tysons office building, announced yesterday (Wednesday) that the law firm Williams Mullen and defense contractor Hanwha Defense International will both be relocating to the tower later this year.

According to a press release, Hanwha will lease 2,768 square feet on the 440,000 square-foot tower’s 18th floor starting in June as it seeks to expand its U.S. presence.

The South Korean conglomerate, which employs approximately 44,000 people across 22 countries, currently has an office in Crystal City, Arlington.

“Hanwha Defense International is excited about the opportunity to continue its growth inside the United States, in particular at Boro Tower in Northern Virginia,” Hanwha Defense Senior Executive Vice President Bernard S. Champoux said. “Our new offices in The Boro offer us the ability to further demonstrate another step in our commitment to our U.S. defense clients. We look forward to joining the already impressive tenant base inside The Boro.”

Hanwha will be joined in September by Williams Mullen, which is leasing 14,950 square feet on the Boro Tower’s 16th floor.

The full-service law firm primarily operates in the mid-Atlantic region with about 240 attorneys in offices across Virignia, D.C., North Carolina, and South Carolina. Its new offices in the Boro Tower will replace its nearby existing office in Suite 100 of 8300 Greensboro Drive.

“Williams Mullen is thrilled to be making the move to Boro Tower,” Woody Fowler, the law firm’s president and CEO, said. “It’s a terrific location and it’s move-in ready with excellent amenities.”

With the new additions, the Boro Tower will be 80% leased with 89,000 square feet of office space still available. Existing tenants include Alion Science and Technology, the accounting firm KPMG, media company TEGNA, and the law firms Hogan Lovells and Womble Bond Dickinson.

Located at 8350 Broad Street, the 20-story Boro Tower was completed in 2019 and includes lobby-level retail space in addition to office space. It is part of The Meridian Group’s 15-acre The Boro mixed-use development near the Greensboro Metro station and Tysons Galleria.

“They demonstrate the kind of interest Tysons has continued to experience from prospective tenants in the DC metro market,” she said. “Companies and organizations are looking forward, especially in the DC metro, to the workplace requirements of the future. Boro Tower, with its ease of access and really exceptional on-site amenities, checks a lot of boxes for organizations in the market today.”