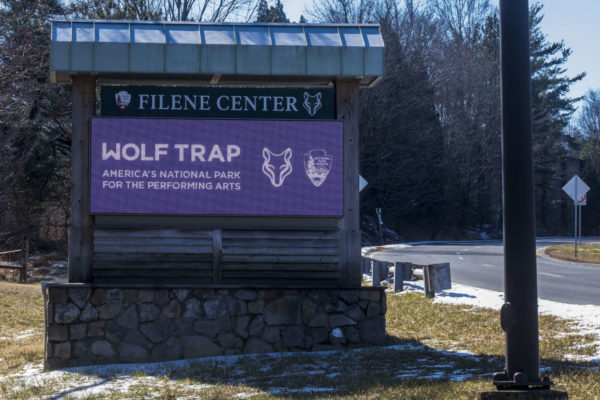 (Updated at 11:20 a.m.) Wolf Trap National Park for the Performing Arts is still a month away from launching its 50th anniversary season, but the National Park Service is already looking further into the future.

In partnership with the Wolf Trap Foundation for the Performing Arts, NPS announced yesterday (Thursday) that it will unveil a proposed amendment to the park’s general management plan at a virtual public meeting on May 25.

“As we mark our 50th anniversary season, Wolf Trap Foundation and the National Park Service are collaborating on proposed improvements that will elevate the Wolf Trap experience for visitors and artists into the next 50 years and ensure that Wolf Trap continues to be a treasured cultural community resource for generations,” a Wolf Trap Foundation spokesperson said in a statement to Tysons Reporter.

NPS spokesperson Jan Lemons says the general management plans for each national park are created by staff and reviewed periodically with updates coming “as needed to improve the visitor experience while still preserving the history, landscapes, and resources of the park.”

“The goal of this proposed amendment…is to strategically guide the park in future developments in a cohesive manner,” Lemons said. “The proposed amendments include several updates to the Filene Center to improve safety and security along with aesthetics, comfort, and convenience.”

According to a news release, the potential changes include:

The move to update Wolf Trap’s master plan comes as the park prepares to resume in-person performances more than a year after suspending most programming due to the COVID-19 pandemic.

The park is also in the midst of a privately funded renovation project that will introduce new, permanent pavilions in place of the temporary tents that cover many facilities.

The live, virtual public scoping meeting on the proposed amendment will take place on May 25 from 6-7:30 p.m. Community members can join the meeting through Microsoft Teams or by calling 877-286-5733 and entering conference ID 161885943#.

The presentation materials will be posted on the project website that day, and a recording of the meeting will be available for viewing after May 26.

The meeting will be followed by a public comment period with a deadline of June 25. The NPS will accept feedback through the project website or by mail to Wolf Trap National Park Acting Superintendent Ken Bigley at 1551 Trap Road, Vienna, VA 22182.

According to the NPS, the 30-day public comment period is the first step in the process of developing an environmental assessment to evaluate how the proposed changes might affect park resources.

“The NPS is preparing an Environmental Assessment for this proposed amendment,” the NPS said. “We’ll consider public comments as we develop and finalize the amendment, and then will implement park improvements as funding becomes available.”