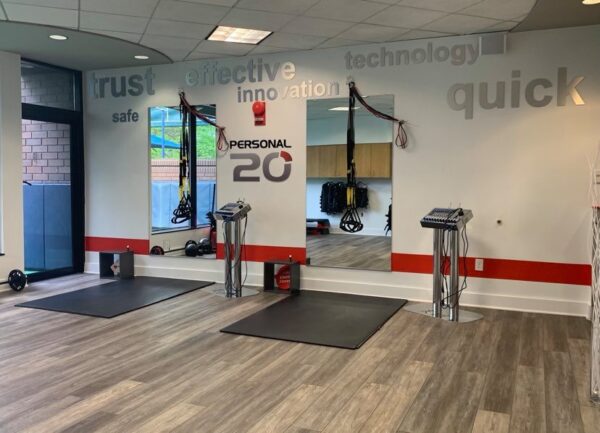 Put on weight during quarantine that you’re looking to lose? A new fitness center in Tysons says it can help.

Founded in Portugal before opening its first U.S. franchise in Herndon in 2017, Personal20 advertises its workout as giving users the effects of a 90-minute workout in just 20 minutes by using electrodes that stimulate the muscles being used during the workout.

Personal20 cofounder Connie Ruiz, who also owns the Herndon and Tysons studios, says that EMS workouts have especially gained popularity in Europe. The EMS technology has also been featured on shows like “The Doctors” and “Rachael Ray.”

Ruiz told Tysons Reporter that Personal20 decided to expand into the Tysons area, because the Herndon studio frequently draws people from Tysons and D.C.

“We believe this location will quickly build up to serve the local area,” she said.

Recognizing that people might not have time to undertake multiple 90-minute workouts every week, Personal20 recommends that its clients do an EMS workout once or twice a week, which it says would be the equivalent of 90 to 180 minutes of non-EMS training.

According to Ruiz, both U.S. studios comply with all CDC guidelines for gyms and fitness centers, including temperature checks, masks, social distancing and equipment sanitizing. Patrons are allowed to take off their masks while working out but must wear them while entering and exiting the studio.

She says the Tysons studio is 750 square feet in size, allowing up to four occupants at a time, or two trainers with a client each.

“We believe these are the reasons our first studio recovered after Covid,” Ruiz said. “People feel safe with the extra measures of cleanliness and privacy.”