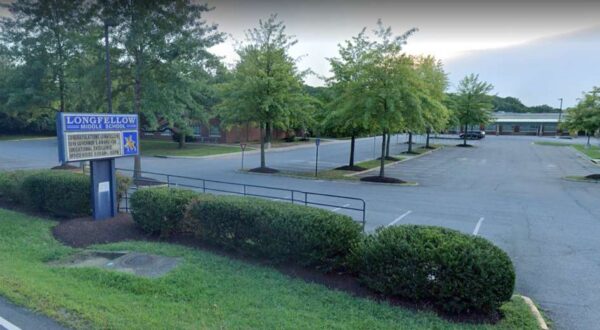 A Fairfax County Public Schools student reported being targeted by anti-Asian slurs and other kinds of harassment during an encounter at Longfellow Middle School in McLean earlier this week, FCPS confirmed to Tysons Reporter.

The Fairfax County Police Department says a juvenile reported to an officer on Tuesday (March 23) that he was confronted by “several other juveniles” while attempting to use a recreational field at Longfellow around 6:20 p.m. on March 22.

According to police, the individual said that the people who confronted him “made derogatory remarks relating to his race and natural origin. The juvenile also mentioned the group spat near him.”

The student was not injured or assaulted, but the incident is under investigation by the school resource officer assigned to Longfellow Middle School. The FCPD says it is also “working collaboratively with our partners in FCPS to ensure that all students are treated fairly and with respect.”

While the incident took place on Longfellow grounds, the victim does not attend that school, according to FCPS spokesperson Helen Lloyd.

FCPS acknowledged the ongoing investigation in a letter to the McLean community from Longfellow Principal Jim Patrick and McLean High School Principal Ellen Reilly. The letter, which was provided to Tysons Reporter by FCPS, states that the slurs reportedly directed at the student were anti-Asian.

“We stand with our Asian American and Pacific Islander (AAPI) students, staff and community and unequivocally denounce racism and discrimination of all kinds and to condemn all acts of hate,” Patrick and Reilly said in their letter. “We are committed to ensuring safe spaces for all of our students and interrupting any experience that would cause pain and trauma as a result of racialized (or other identity based) violence.”

The reported incident occurred on the same day that public officials and community members gathered in Annandale for a vigil to mourn the eight people — including six Asian women — who were shot and killed in the Atlanta area on March 17, a tragedy that put a spotlight on the racism that people of Asian descent experience in the U.S.

The Pew Research Center found last summer that the onset of the COVID-19 pandemic fueled an uptick in discrimination against Asian Americans.

In a report released on March 16, the advocacy coalition Stop AAPI Hate said since March 2020, it has recorded 3,795 hate incidents — ranging from verbal harassment and shunning to physical assaults — including 140 incidents in the D.C. area.

When it met on March 18, the Fairfax County School Board unanimously supported a resolution condemning violence and discrimination against Asians and Asian Americans. The county board of supervisors followed suit on Tuesday (March 23).

FCPS Superintendent Scott Brabrand issued a statement last week saying that the school system “condemns all acts of violence” while acknowledging the “misinformation and xenophobic language that have led to aggression toward, harassment, and exclusion of our students and families from AAPI communities.”

“It is our responsibility to ensure that all people are treated with dignity and humanity in our schools,” Brabrand said. “These behaviors are more than being unkind and will not be tolerated. Our success and well-being as a school division depends upon us standing united against any acts of violence and hatred committed against any person or group within our community.”

FCPS says that anyone with information related to the incident at Longfellow Middle School should contact their school principal or Fairfax County police.