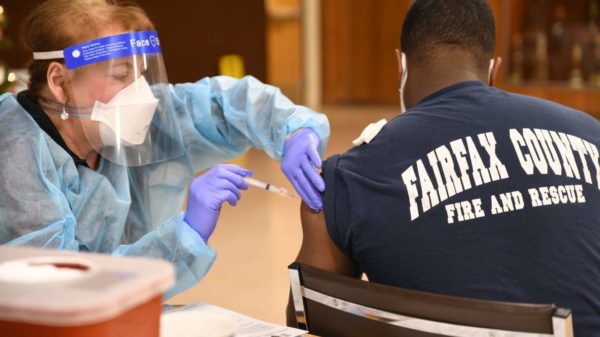 The COVID-19 vaccination process has been ramping up in Fairfax County in recent weeks, as supplies increase and more partners come on board to help administer the vaccines.

While eligibility for the vaccine has not expanded since mid-January, Fairfax County’s allocation of vaccine has grown over the past month or so from 13,000 to 19,220 first doses per week, and the size of shipments are expected to continue increasing throughout March, allowing the county health department to get through its existing waitlist more quickly.

As of 5 p.m. yesterday (Thursday), more than 111,000 people were waiting for appointments to get vaccinated. A total of 307,659 people have registered through the Fairfax County Health Department, which administered 21,791 first doses during the week of March 1-7.

The authorization of a third vaccine manufactured by Johnson & Johnson helps increase supply, giving providers another option on top of the Pfizer and Moderna vaccines that have been available since December, according to the Fairfax County Health Department.

Unlike the Pfizer and Moderna vaccines, which both require two shots separated by three or four weeks, the Johnson & Johnson vaccine needs only one dose. It is also easier to store and seems to less apt to trigger strong side effects.

The J&J vaccine is slightly less effective at guarding against severe disease caused by COVID-19, with an 85% efficacy rate compared to 95% and 94.1% for Pfizer and Moderna, respectively. However, differences in how clinical trials were conducted make comparisons inexact, and all three are considered “extremely effective at preventing severe disease, hospitalization, and death,” FCHD says.

Fairfax County currently doesn’t offer a choice between the vaccines, since the health department has been primarily utilizing Pfizer for first doses. The county has been sending its J&J allocation to Inova, which expects to double its capacity later this month with the launch of a new mass vaccination center in Alexandria.

The FCHD says it anticipates getting more of the J&J vaccine by the end of March, though the number of doses is unknown at this time. For now, officials say people should take whichever vaccine becomes available to them.

If you were given a choice, though, which would you prefer? Would you want to get the process over with in one shot, or do you have more confidence in the two-shot Pfizer and Moderna vaccines?