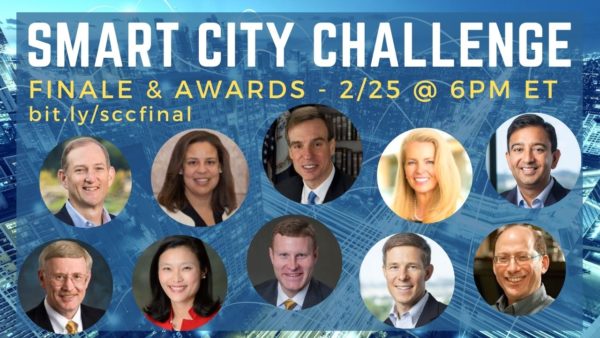 However, the advancing teams will have to wait a little longer than expected to vie for the competition’s top prizes, which include more than $350,000 in cash and in-kind prizes as well as the chance to work on a pilot project for Fairfax County and the City of Fairfax.

Shortly after releasing the list of finalists, organizers Smart City Works and the McLean-based Refraction announced yesterday (Wednesday) that the concluding event — where the finalists will pitch their ideas live to a panel of judges — and subsequent awards ceremony have been postponed by a week to Feb. 25 due to weather concerns.

“The National Weather Service is forecasting a winter storm in the greater Washington, DC region tomorrow with power outages ‘likely.’  If even one team is unable to pitch due to a power outage, it would be unfair,” the Smart City Challenge team said in a message to participants.

The organizers say they decided to delay the finale, which was scheduled to take place today from 6-8:30 p.m., after consulting with their partners on the challenge, a group that includes the utility Dominion Energy and Fairfax County.

Sen. Mark Warner (D-Va.) and Fairfax County Board of Supervisors Chairman Jeff McKay are among the speakers scheduled for the event, which remains open for registration.

The Smart City Challenge kicked off on Jan. 23. In addition to the competition, it featured different virtual panels on topics like sustainability and housing that were open to the general public.

“The Smart City Challenge is the perfect opportunity to tap bright minds to improve the lives of everyone in the Washington, DC area through technology, innovation, and problem-solving,” Refraction CEO Esther Lee said. “We are excited to bring together forward-thinking businesses, entrepreneurs, universities, government, and nonprofits to showcase collaboration and thought leadership.”

The competition finalists will be evaluated based on innovation, impact, practicality, and equity by a panel of six judges, including Lee, Dranesville District Supervisor John Foust, and Smart City Works Venture Labs CEO David Heyman.

The finalist teams are listed below, along with their proposed projects: