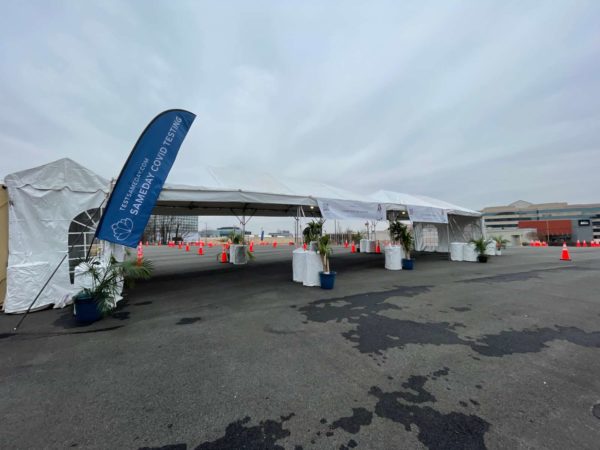 (Updated at 3:20 on 2/18/2021) A parking lot outside of Tysons Corner Center has been converted into a drive-thru COVID-19 testing site, adding to the 30-plus sites that have already been established around Fairfax County over the past 11 months.

The startup Sameday Health opened the new site at 1981 Chain Bridge Rd. on Friday (Feb. 20). The 20,000 square-foot, 550-space lot has the capacity to accommodate over 1,000 people per day, according to Sameday Testing managing partner Patrick Emad.

This is Sameday’s first Fairfax County testing site and its 11th in the D.C. area since launching one in Georgetown in November. The company also has sites in Alexandria, Arlington, and Sterling.

Emad says Sameday decided to open a site in Tysons because of its proximity to several major roads, including the Capital Beltway, Route 7, and the Dulles Toll Road. The amount of traffic that passes through the area also made it an ideal spot for a drive-thru site, rather than a walk-in facility.

“We figured if we increase the access to testing, more people will get tested, especially because it’s free with insurance, and it will allow us to help stop the spread,” Emad said.

The standard RT-PCR test carries no out-of-pocket costs for people with insurance and has a turnaround time of under 72 hours, though that can be reduced to less than 24 hours for a rush fee of $75. People without insurance can pay $125 for a rapid antigen test that produces results in 30 minutes or $175 for the 24-hour RT-PCR test.

Emad helped build Sameday Health with CEO Felix Huettenbach after witnessing the initial days of the COVID-19 pandemic as a volunteer firefighter and emergency medical technician in Montgomery County. Huttenbach had been working for a startup that used PCR testing to detect cancers, and they realized the same technology could be applied to COVID-19 testing.

While some initial kinks needed to be worked out, Emad says the custom-built portal that Sameday uses allows for efficiency, since every step of the process, from the appointment scheduling to the delivery of results, is conducted through the same computer system.

Appointments can be booked online and generally take about 10 minutes, though the wait time can vary depending on demand.

“Majority of the time, it’s a seamless process,” Emad said. “Our medical staff and professionals are very well-trained to make it nice and easy and comforting, and they’re happy to answer questions and do it with a smile under their mask.”

Sameday Testing worked with Macerich, which owns and operates the Tysons Corner mall, to set up the Tysons testing site. Emad says both companies hope to turn it into a mass vaccination site in the future.

The Fairfax County Health Department recommends that anyone who has COVID-19 symptoms or has been exposed to someone who tested positive for the disease get tested.

“Testing remains a critically important part of the pandemic response,” Fairfax County Director of Epidemiology and Population Health Dr. Benjamin Schwartz said. “While anyone who has symptoms of COVID-19 should separate themselves from others (self-isolate) as soon as they recognize those symptoms so they don’t spread illness if it’s COVID-19, a positive test result reinforces the need for isolation and sets in motion the Health Department’s containment response.”

In addition to enabling individuals to determine whether they are infected, COVID-19 tests allow investigators to trace the disease’s spread and potential outbreaks. Samples of positive specimens are also sent to Virginia’s state laboratory for genetic sequencing that can be used to detect possible variants.

Correction: References to Sameday Testing have been changed to reflect that the company has rebranded and is now called Sameday Health.