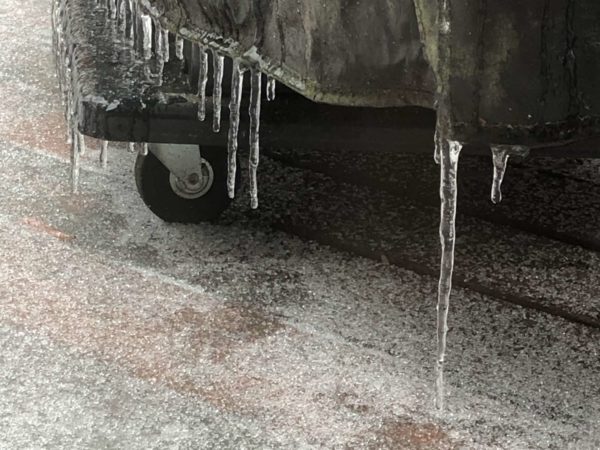 Fairfax County is now under an Ice Storm Warning after the National Weather Service upgraded the Winter Storm Watch it had put out for the D.C. area starting this morning.

Issued at 1:56 p.m., the ice storm warning will remain in effect until 7 a.m. tomorrow (Sunday). The NWS projects that the region will see 0.2-0.3 inches of sleet and freezing rain, which has been leaving roads slick with ice throughout the day.

This is the first time that an ice storm warning has been issued for the D.C. area since Feb. 12, 2008, according to Washington Post meterologist Matthew Cappucci.

The Virginia Department of Transportation is warning people to stay off the roads, noting that pavement could be slick even after it is treated.

The Fairfax County Park Authority announced at 2:19 p.m. that all of its facilities will close at 3:30 p.m., and all activities and programs scheduled after that time have been canceled for today. All activities on Fairfax County Public Schools grounds had already been suspended.

In the Tysons area, The Boro has canceled its scheduled Valentine’s drive-in movie screening of “Crazy, Stupid, Love” due to the inclement weather, though tomorrow’s screening of “Valentine’s Day” is expected to take place as planned.

Dominion Energy reported that ice damage to power lines is causing power outages in some areas.

The NWS advises anyone who must travel to take a flashlight, food, and water in case of an emergency. Power outages are also possible.

“When venturing outside, watch your first few steps taken on steps, sidewalks, and driveways, which could be icy and slippery, increasing your risk of a fall and injury,” the NWS said.

Actually no, we will comment. The roads are icy and it’s getting worse despite our continued treatment. Just pls #stayhome. We want you to be safe. pic.twitter.com/p4GDNYJupy