Two former competitive swimmers, who are now partners in business and marriage, are opening a year-round, warm-water swimming school in Tysons.

SafeSplash is a national swim school franchise with more than 100 locations. It is also the official swim school provider of USA Swimming, the governing body for competitive swimming that chooses the U.S. Olympic swimming team. 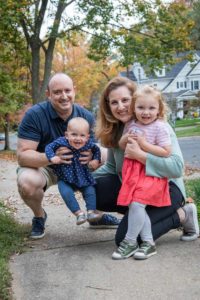 This is Jennifer and Michael Lilintahl’s fourth SafeSplash in the D.C. area, their second inside a hotel, and their first in Virginia. The couple chose the McLean area because there are relatively few conveniently located options for swim schools, Jennifer says.

The Lilintahls have also tapped into an underutilized resource for swimming schools: hotel swimming pools. Now, their idea is paving the way for other franchisees.

After the Washington Sports Club that housed one of their two Bethesda schools closed for good last summer, the couple moved it to a Hilton Hotel in D.C.’s Friendship Heights area. They now serve as a resource for SafeSplash franchisees interested in working with hotels.

Building a dedicated swimming facility is expensive, and available bodies of water are hard to come by, Jennifer says. Meanwhile, many hotels boast rarely used pools.

“It has worked out well during COVID-19. Hospitality is having such challenges, so this is an extra stream of revenue for them and a body of water for us,” she said. “It’s a win-win.”

The Lilintahls opened their first location in 2017 on Rockville Pike in North Bethesda and soon after, expanded to a Washington Sports Club in downtown Bethesda. They opened a franchise in D.C.’s Columbia Heights area in 2019.

“It’s been a long journey,” Jennifer, who swam competitively through high school, said.

She credits her husband with proposing the idea to run their own swimming schools. Michael Lilintahl went to college on a full-ride athletic scholarship for swimming and represented his home country, Venezuela, in the 1996 Olympic Games in Atlanta. She says he wanted to help others unlock opportunities in life through the sport.

“It was always a passion of his to combine his love for swimming with a business,” she said. “Swimming took him so far in life.”

The Tysons SafeSplash will first open its doors on Saturday, Feb. 20, from 9:30 to 11:30 a.m. Ahead of opening day and for a limited time afterward, the Lilintahls are offering discounts: 20% off for eight consecutive weeks of lessons or 50% off one class.

To keep clients safe during the pandemic, the couple is only offering private and semi-private lessons, which are capped at three children (typically siblings or kids in the same “pod”). Every instructor wears a silicone, water-proof mask, and many are doubling up with surgical masks, she said.