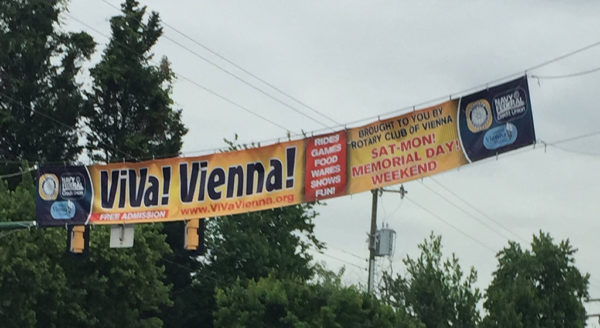 After a year off, ViVa Vienna will look quite different in 2021 — if it gets held at all.

Planning for the Town of Vienna’s annual Memorial Day festival has commenced, but with the COVID-19 pandemic still an unavoidable threat to any public gathering, many details remain up in the air, from exactly when and where it will be held to how to control attendance at the typically bustling event.

The Rotary Club of Vienna, which sponsors the festival, told the Vienna Town Council on Monday (Feb. 8) that it would like to hold ViVa Vienna around Memorial Day as usual. This year’s Memorial Day weekend falls on May 29-31.

However, organizers say it will not be feasible to move forward with the event if Virginia is still limiting fairs and other entertainment businesses to 250 people at that time.

“We’re still working through a lot of this,” Rotary Club of Vienna ViVa Vienna Committee Chair AJ Oskuie said. “If we have the number [at] 250, it just won’t work from an economic standpoint.”

As an alternative, the rotary club has proposed pushing ViVa Vienna back to the weekend of Oct. 16. Oskuie says that is the earliest possible date if Memorial Day weekend does not pan out, because the festival’s usual ride vendor, Cole Amusement Company, is booked until then.

Town officials noted that, while it would leave more time for the pandemic to get under control and restrictions on crowds to potentially lift, an October date would present its own challenges, both from a health standpoint with the cooler weather and a logistical one.

Vienna already hosts a Halloween parade and Oktoberfest that month, and if the 2022 ViVa Vienna returns to the normal May date, it would mean having the same event twice in one fiscal year, something the town has never done before.

“Those are big events,” Vienna Town Manager Mercury Payton said. “That’s the part that makes me wonder how it would affect staff. We can make that work, but that to me is a higher concern than the monetary piece.”

The Town of Vienna co-sponsors ViVa Vienna and provides staffing support for security, road closures, trash removal, and setting up the facilities. Vienna Finance Director Marion Serfass says the town spent about $43,000 to pay staff overtime for the last ViVa Vienna in 2019, though a two-day event would cost closer to $28,000.

Councilmember Nisha Patel noted that the festival has the advantage of being outdoors, which poses less of a risk for spreading COVID-19, but organizers will have to implement safety measures, like a mask requirement, regardless of when the event takes place.

Oskuie confirmed that enclosed amusements like a funhouse will not be included, and the festival might use food truck vendors instead of stalls so they can spread out, rather than stay confined to one location.

Vienna Parks and Recreation Director Leslie Herman recommended preventing crowds by moving the festivities to an area that can be fenced in with entrances and exits, and by requiring attendees to register for time slots.

An event plan has to be approved by the Fairfax County Health Department and Fire Marshal’s Office, along with the Vienna Parks and Recreation Department. Oskuie told the town council that the Rotary Club will deliver a status update on Mar. 1, with Apr. 5 as the deadline for making a final decision on how to handle the festival this year.

Despite the obstacles, Vienna officials expressed hope that ViVa Vienna will go on. In addition to drawing as many as 30,000 to 40,000 people every year, the festival typically generates about $175,000 in proceeds that the Rotary Club gives to local charities and community organizations.

“We just need to be cautiously optimistic. There are so many unknowns out there right now,” Councilmember Steve Potter said. “…Just take it one week at a time and see where we go, but we need it. The town needs the uplift. Everybody needs it right now, and I don’t think we should drop it.”