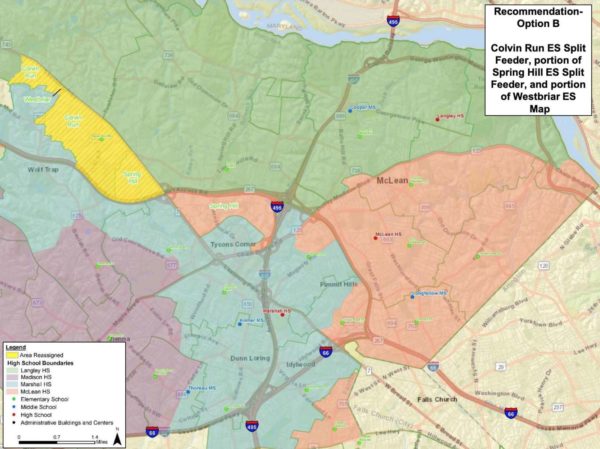 The Fairfax County School Board voted last night (Thursday) to change the boundaries for McLean and Langley high schools — but not in the way they had discussed last month.

Of the three possible boundary changes presented to the community in December, Fairfax County Public Schools recommended a modified version of Option C when the school board met on Jan. 21. Last night, however, the option presented for the board to vote on was “Option B,” which passed 11-1 with Member-At-Large Abrar Omeish dissenting.

Dranesville District Representative Elaine Tholen also included a provision that would allow rising ninth graders affected by the boundary change to either attend Langley High School this fall or be grandfathered into McLean High School and get transportation provided for all four years of school.

Overcrowding is a decades-old problem at McLean despite several attempts to add space, the latest of which comes in the form of 12 modular classrooms that are currently under construction. They will be finished later this month and ready for students’ return in March, Tholen said.

Tholen said Option B came out ahead after the board weighed “many considerations, many of them contradictory,” from the impact of future developments to diversity at Langley High School.

“We heard loud and clear from those who participated in our public hearing and public engagement process: Clean up at least one split feeder while giving McLean some capacity relief,” Tholen said.

Community input is also the reason why the two feeder middle schools of Longfellow and Cooper were included in the boundary adjustment study.

As a result of the new boundaries, an estimated 190 students previously assigned to McLean will now go to Langley, and an estimated 78 students from Longfellow will be moved to Cooper.

“This is not a perfect solution. Neither were the other options,” Providence District Representative Karl Frisch said, adding that he would have loved to address the Colvin Run and Spring Hill split feeders “in their entirety.”

Frisch said this option relieves capacity concerns at McLean without overloading Langley or Cooper, and improves both the Colvin Run and Spring Hill split feeders. He added that FCPS and the board will continue studying capacity data for McLean, Langley and Marshall high schools as well as other schools in the Tysons area.

Omeish commended Tholen for her diligence but predicted the board will be “finding ourselves here in a few years” with this limited change.

“I don’t feel in good conscience that this is the most long-term solution,” she said.