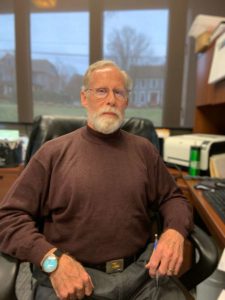 McLean Community Center Executive Director George Sachs officially announced yesterday (Thursday) that he will retire on May 7 after more than a decade in the position.

MCC started advertising for the executive director job in December, signaling that Sachs would step down.

Though he has been preparing to retire since enrolling in the county’s deferred retirement option program three years ago, Sachs is still coming to terms with the prospect of leaving MCC.

“Really, I don’t want to leave,” Sachs admitted. “It’s just that I’ve come to a realization in my life. I turn 70 years old, and looking back and looking forward to what I want to do, I’m ready…to move forward.”

For Sachs, serving as MCC’s chief administrative officer was the culmination of a nearly five-decade career that began in 1974 when he got his first full-time job working at Fairfax County’s recreation department.

Sachs went on to work at the Fairfax County Park Authority for five years, a tenure that included opening the county’s first RECenter at Wakefield Park. The facility is now known as the Audrey Moore RECenter.

Sachs first joined MCC as its deputy director in 1991 after managing the recreation and sports facilities at George Mason University for nearly 10 years. He spent four years with MCC before moving to South Carolina, where he owned and operated his own chain of health and fitness centers.

However, after the Great Recession hit in 2008, Sachs says he struggled to compete as a small business owner. He decided to return to Fairfax County in 2009, when MCC hired him again, this time to manage the Old Firehouse Teen Center.

Appointed as MCC’s executive director in 2010, Sachs shepherded MCC through an extensive $8 million overhaul of its Ingleside Avenue center, a five-year process that involved relocating staff to four different sites around McLean and culminated with a reopening in 2018.

“It gave more space and openness to the center,” Sachs said of the renovation. “…It’s just more inviting for people to come in. When you come in the center now, you can actually see that there’s activity in the center.”

The renovation also gave MCC an opportunity to reevaluate and expand its programs and services by adding an aerobic fitness room, meeting rooms, and other facilities.

MCC’s unique status as a government organization funded by McLean residents’ taxes, along with fees and donations, enables it to offer diverse programming that does not always need to draw huge crowds or have mass appeal, Sachs says.

He particularly enjoyed working on the performing and visual arts events at the Alden, since that wasn’t something he got to explore in his jobs at the park authority or George Mason.

Sachs’s final year with MCC has been an unusual one as the COVID-19 pandemic has upended the center’s operations, forcing programs and classes online and the first-ever cancellation of its annual McLean Day celebration.

Still, he is proud of how the staff has adapted to the difficult circumstances.

“They’re innovative. They’re hard-working,” Sachs said. “They’ve embraced the challenges of having to do virtual planning and programming, and we’re continuing to go on.”

Giving staff a supportive working environment and being a good listener are the two traits that Sachs most hopes to see in his successor, who is expected to be named by the MCC governing board by the end of March to allow for a transition period.

While he wishes he could be a part of the community center when it hopefully returns to life after the pandemic, Sachs says he looks forward to being able to actively participate in the many arts and recreation programs that he has spent his career directing.

He also has no intention of leaving behind the people and community of McLean.

“It’s just a great, fun place to be. There’s never a dull moment,” Sachs said. “There’s always something interesting out there to look at or consider, and again, our diverse programming that we provide to capture the interests of our community, there’s just so many interests.”