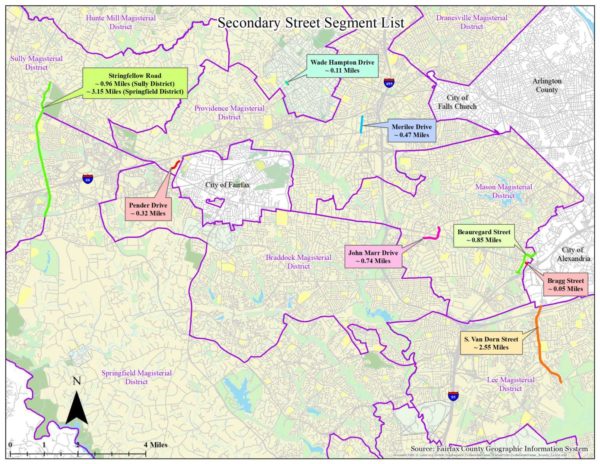 This project began over the summer when the board directed the commission to create an inventory of places and structures within the county that have ties to the Confederacy after Black Lives Matter protests spread around the country following the May 25 death of George Floyd.

The resulting report identified more than 26,000 streets and places, leading the board to narrow its focus to 650 well-known Confederate officers and locally-known Confederates. After researching those names, the Commission found 150 assets to have confirmed Confederacy-associated names, according to the presentation by Anne Stuntz, the chairwoman of the history commission.

The commission recommended that the Board of Supervisors create a public dialogue on the issue through public meetings and community gatherings before deliberating and taking definitive action on the Confederate names. The commission also recommended archiving the extensive project research in the Virginia Room at the City of Fairfax Regional Library.

Fairfax County Department of Transportation Director Tom Biesiadney said that the Commonwealth Transportation Board would require public input and a formal request from the Board of Supervisors if the county decides to petition to change the name of Lee Highway and Lee-Jackson Memorial Highway.

In response to the Confederate names project, the history commission is collaborating with local African American organizations, including religious, social, and community groups, on a 2021 initiative to compile research materials on African American communities in Fairfax County.

The county supervisors shared their appreciation for the history commission’s extensive and intricate research. They also mostly agreed that the first priority should be renaming highways, and from there, they could start a community process for renaming secondary and neighborhood streets.

“I was hoping that there’d be something more definitive about Lee District, in terms of where its name originated, but it appears that we still have the same set of ambiguity,” Lusk said. “We will have to have a community conversation about this name of this district.”

Springfield District Supervisor Pat Herrity warned against rushing into the name change process in the midst of the COVID-19 pandemic, emphasizing the need for “robust community participation” before moving forward.

Read more →
More Stories
Poll: Do You Think Fairfax County Should Implement a Plastic Bag Tax?Playsets, Pools and Patios… What’s the Next Pandemic Must-Have for Your Home?