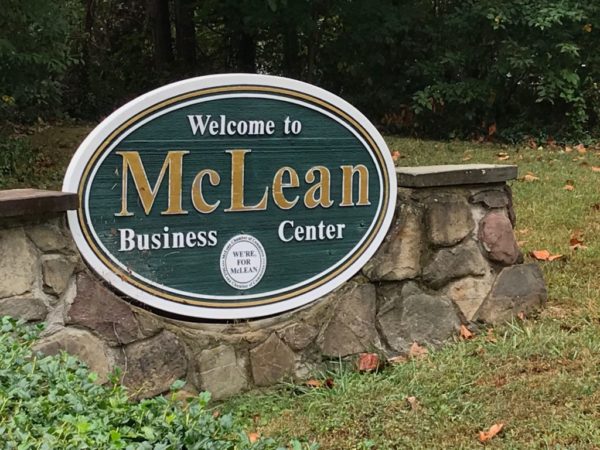 What if McLean became a city?

While the question is largely hypothetical at the moment, the McLean Citizens Association will consider whether it might be worth exploring more seriously during tonight’s board of directors meeting amid the usual committee and liaison updates.

The discussion will be led by MCA President Rob Jackson, who says the idea of McLean leaving Fairfax County and turning into a city has cropped up in casual conversations among members of MCA and other community nonprofits in the past.

“A number of people expressed the belief that Fairfax County is simply too large to respond to the needs and wishes of the million-plus people who live here and that smaller local government might better serve the diverse needs of the residents,” Jackson said in an email to MCA members.

Right now, the clearest obstacle to a City of McLean is state law, which has suspended the creation of new cities in Virginia since 1987.

Under Section 15.2-3201, the Code of Virginia states that “no city charter shall be granted or come into force and no suit or notice shall be filed to secure a city charter” until July 1, 2024 at the earliest. The statute also prohibits cities from pursuing annexation proceedings against counties.

A bill seeking to make an exception to the ban on new city charters for towns with more than 50,000 people died in committee during the Virginia General Assembly’s 2020 session.

Though the moratorium will be in place for another three years, Jackson says he thought it would be worthwhile to bring up the idea of McLean becoming a city again after previous discussions faded away once the COVID-19 pandemic took center stage.

For Jackson, the interest in exploring the possibility of forming a city stems mainly from a desire for McLean residents to have more control instead of having to compete for attention in a county with more than 1.1 million people, citing issues like overcrowding at McLean High School, land use decisions, and the upkeep of sidewalks and trails.

As a city, McLean would be responsible for developing its own comprehensive plan and zoning ordinance. It would also maintain road infrastructure within its boundaries and have independent governance over public services like law enforcement and schools.

“It’s about controlling your own destiny,” Jackson said. “There’s a lot of frustration in some areas with the county maybe is not as responsive as it needs to be on some things to meet local needs…I think just the ability to have more self-determination, more ability and responsibility to make decisions would probably be attractive to a lot of people.”

Tonight’s MCA discussion will focus on whether to work with other community groups, such as the Greater McLean Chamber of Commerce or local parent-teacher associations, to form an ad hoc committee that would study the benefits and challenges of establishing a city. The meeting will be streamed live on Facebook starting at 7:30 p.m.

“It’s just kind of exploring things, reaching out to other groups and begin to explore, to get some information,” Jackson said. “This may turn out to be something that just wouldn’t work, but until you look at it, you never know.”