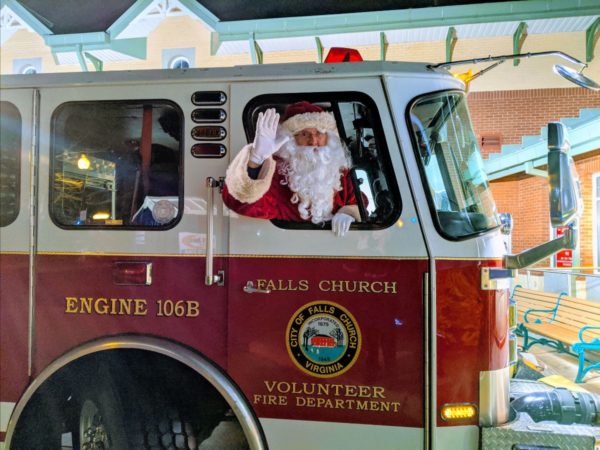 Santa will once again grace Falls Church City with his presence this December, but he will have a lighter sleigh in tow.

The City of Falls Church Volunteer Fire Department announced on Nov. 19 that its Santamobile – a fire truck festooned with colorful string lights and other decorations – will not distribute candy canes and safety literature when it tours the area this year due to the health risks presented by the COVID-19 pandemic.

“Due to the current pandemic, our event coordinators have decided that although we will still have Santamobile this year, it will be modified to avoid in-person interaction, in order to protect the safety of our staff and the public,” the FCVFD said.

As in previous years, the Santamobile will first set out on Dec. 15 with stops in each of the city’s neighborhoods over the next four nights before venturing into neighboring Fairfax and Arlington counties. Each night will go from 6:30 to 9:30 p.m., and the last day of the event will be Dec. 23.

Here is the Santamobile’s current schedule for its tour through Falls Church City:

A map of the vehicle’s planned routes can be found on the Falls Church Volunteer Fire Department’s website at fallschurchfire.org/santamobile.

“Please note that routes are subject to change based on road conditions including parking, traffic, and construction,” the FCVFD says.

Any changes to the Santamobile schedule will be posted to the FCVFD Facebook page, which will have a link to a SantaTracker. The department says questions about the Santamobile should be directed to [email protected], not its fire station.

The FCVFD says that the Santamobile will not be able to respond to requests for private drive-by visits.

In addition to bringing holiday cheer to families around the city, the annual Santamobile serves the function of raising awareness about fire safety, according to the FCVFD.

This year, the department’s public education team is asking community members to fill out an online survey about what safety presentations might be most useful to them. The survey can be found on the FCVFD website at fallschurchfire.org/public-education-survey.