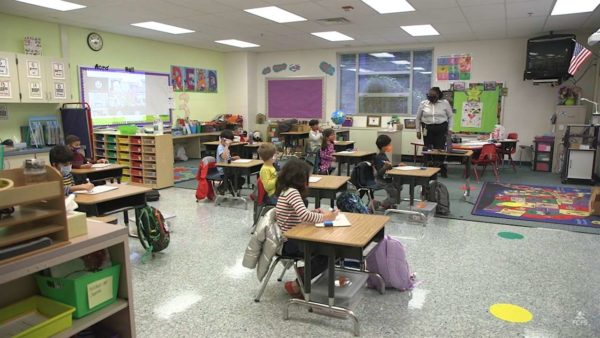 In a perfect world, Sahar Javadi’s children would have gone back to school on Aug. 25 as the Fairfax County School Board planned when it adopted a calendar for this academic year in July.

In a perfect world, there would presumably be no novel coronavirus, let alone a pandemic that appears to be resurgent in Virginia just as the weather cools and Fairfax County Public Schools prepares to usher more students back into physical classrooms for the first time since March.

Because this is not a perfect world, however, Javadi and thousands of other parents in Fairfax County have spent the past month deciding whether to send their children back to school and risk them contracting COVID-19, or stick with virtual learning despite its challenges.

Javadi says she has been impressed by how the teachers at Freedom Hill Elementary School in Vienna have adapted to online classes, especially compared to the chaotic transition that FCPS went through when schools shut down in the spring.

When surveyed over the summer and again in October about whether to continue exclusively with virtual learning or to attempt the hybrid model proposed by FCPS, Javadi opted to sign her fifth-grade and second-grade sons up for two days of in-person classes both times.

“I am a little nervous, but part of it is also, [we] just gotta take a plunge and see where we go next and kind of be adaptive as we move along, because it’s not like COVID’s going away any time soon, right?” said Javadi, who is the president of Freedom Hill’s PTA.

If FCPS sticks with its current “Return to School” plan, which could change if COVID-19 cases continue to rise, Javadi’s younger son will be part of the cohort of first-grade, second-grade, and special education students scheduled to resume in-person learning on Nov. 30.

Fairfax County started bringing students into classrooms on Oct. 5 for specialized high school career preparatory programs. Since then, select groups of special education students and English-language learners have returned, and a cohort of pre-kindergarten and kindergarten students is expected to start in-person classes on Nov. 16.

While Javadi says she feels reassured by FCPS’s planned health protocols, which include a mask requirement and reduced class sizes, Bailey’s Elementary School PTA president Melissa Snyder is more ambivalent about choosing hybrid learning for her first-grader and her third-grader, who is not scheduled to go back to school until Jan. 4.

“It was a difficult decision, and it’s not, from our perspective, an endorsement of the plan to return to school,” Snyder said. “It was made mostly because we didn’t think that the kids were going to get what they needed with the concurrent learning plan. If it had been a truly all-virtual class, we would’ve kept them virtual.”

FCPS spokesperson Lucy Caldwell says the concurrent learning model was developed “to provide an opportunity to carefully and safely return students and staff to the classroom while also engaging students who’ve chosen to remain in the virtual environment.”

“The pilots are giving us actionable anecdotal data to revise plans as we look to bring back future groups of students and staff in-person,” Caldwell said in a statement. “We all recognize that this is an imperfect situation but everyone is working hard to get things right for our teachers and students.”

Though she shares Snyder’s concerns about concurrent learning, James Madison High School senior Melinda Rosen plans to stay virtual for the remainder of the school year, citing both health concerns and a desire for consistency.

Distance learning has been a challenge for many families. Hank Arrington, whose two daughters attend Madison, says technical issues made the spring rollout “an unmitigated disaster,” and Snyder says access to reliable internet remains an issue for many Bailey’s families.

For Rosen, though, virtual learning turned into an unexpected boon, giving her the opportunity to intern for a theater company in Pennsylvania and take English classes through Northern Virginia Community College, which plans to stay remote into spring 2021.

Rosen says it has been “a little scary” to apply for colleges without being able to visit them, but virtual campus tours and waived standardized testing requirements have helped relieve some anxiety.

“The only thing is I was thinking about taking a gap year next year between high school and college, and I don’t think that’s going to be an option right now,” Rosen said. “I’m a little bummed about that, but it hasn’t had too much of an impact.”

Arrington, whose daughters are in 10th and 12th grade, says Madison has done a good job of providing support for students as they navigate an unusual year and regularly communicating with families, though he wishes FCPS made the decision to start the school year all virtual sooner.

“I think it was clear earlier on that [hybrid in-person learning] wasn’t going to be a viable option,” he said.

Though this fall has been a definite improvement from the spring, Arrington says his daughters both want to take in-person classes when high school students are allowed to return, which is tentatively scheduled for Jan. 26. They will have to enforce strict protocols for the sake of his mother, who lives with them and is in a high-risk group.

“I’m comfortable with the idea of everybody being back in January and starting back up sports and all of that,” Arrington said. “Right now, the [COVID-19 case] numbers aren’t looking that great, but whether or not we’ll get another handle on it…in time for back-to-school, which I hope we will, then I’m very comfortable with that decision at this point.”