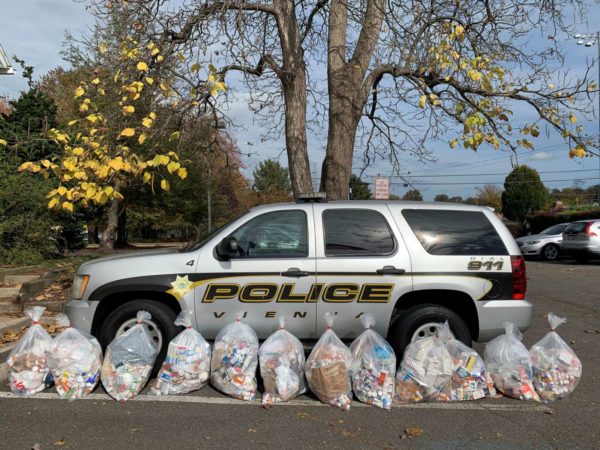 The Town of Vienna Police Department collected 309 pounds of expired or unused medications on Oct. 24 as part of the U.S. Drug Enforcement Administration’s 19th National Drug Take Back Initiative.

That is a noticeable increase from the department’s previous two drug take-back events. Vienna citizens dropped off 234 pounds of expired and unused medications for an event in April 2019 and 281 pounds for an event last October, Vienna Police Department public information officer MPO Juan Vazquez says.

For this year’s October drug take-back day, the Vienna Police Department set up a collection point for citizens to drop off old, expired, unused, or unwanted medications between 10 a.m. and 2 p.m. The site was placed in the front parking lot of the department’s Center Street station instead of inside to allow for social distancing.

The DEA typically organizes two take-back days every year in an effort to combat prescription drug abuse, but concerns about COVID-19 led the federal agency to cancel this year’s scheduled April event.

“Many citizens volunteer feedback and said they were really appreciative of us hosting this event again,” Vasquez said.

More than 4,000 local and state law enforcement agencies participated in the 2020 National Drug Take Back Initiative, including 140 agencies in Virginia that collected 25,706 pounds of drugs at 179 sites, according to the DEA.

The Fairfax County Police Department collected 1,696 pounds of prescription and over-the-counter medications on Oct. 24, including 102 pounds from the McLean District Station, which had the second-lowest total this year after collecting the second-highest amount during last year’s National Drug Take Back Day.

In addition to hosting eight collection sites for this year’s one-day initiative, Fairfax County now has permanent drug take back boxes at each of its eight police stations, and community members can pick up drug disposal kits from the county’s health department offices.

The county accepts prescription medications and ointments, over-the-counter medications, and medications for pets, but needles, liquids of any kind, illegal drugs, non-prescription ointments and lotions, aerosol cans, and inhalers are prohibited from the collection boxes.

“This important initiative addresses vital safety and public health issues,” the FCPD says. “Unused or expired over the counter or prescription medicine left unsecured can be prone to misuse and may contribute to overdoses and accidental poisonings.”