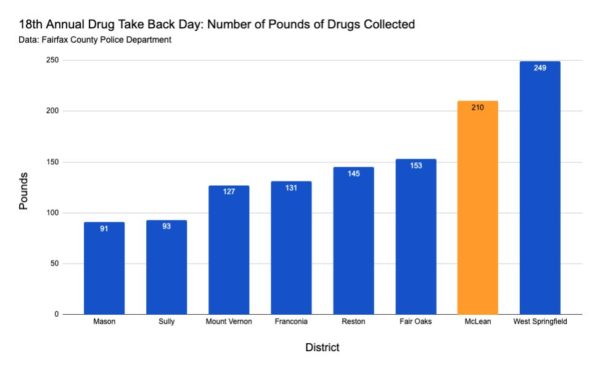 The McLean District Station collected the second-highest amount of prescription drugs during the 18th Annual Drug Take Back Day.

The annual event aims to curb safety and public health issues from unused or expired drugs. The event took place on Saturday (Oct. 26).

“Unused or expired over-the-counter or prescription medicine left unsecured are susceptible to misuse and can contribute to overdoses and accidental poisonings,” according to the Fairfax County Police Department.

All of the Fairfax County police district stations participated, along with the Wegmans in Chantilly. In total, 1,246 pounds of unused and expired prescription drugs were collected, according to the police department.

People who want to dispose of unused medicine — excluding needles, liquids, illegal drugs, ointments and inhalers — can drop it off at take back boxes available year-round at the eight police stations.

Read more →
More Stories
Whole Foods Now Open in The BoroPoll: What Are Your Plans for Halloween?