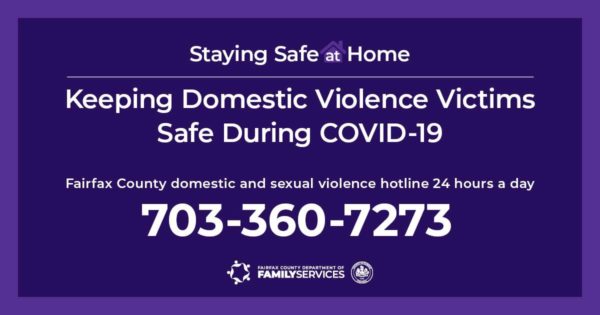 The COVID-19 pandemic has resulted in what some local advocates and law enforcement officials are calling a pandemic within a pandemic for domestic violence victims.

The Fairfax County Police Department reported a slight uptick in calls related to domestic abuse. Following statewide orders to remain at home when possible, the average number of monthly calls jumped from 158 in February to 191 in April.

Between then and July, that number remained near the upper 190s, with a high of 200 calls in July and 200 calls in September, according to FCPD data released to Reston Now, Tysons Reporter’s sister site.

More victims are coming forward with serious injuries than before than pandemic, particularly strangulation attempts and the types of weapons used.

Efforts to contain the spread of COVID-19 have also presented new challenges for police officers who cannot have face-to-face contact with victims.

“It has been stressed from the very beginning of the pandemic to be aware of domestic issues that arise from long hours confined in a home,” FCPD Sgt. Hudson Bull said.

“Officers adapted to the new safeguards but still respond to calls in progress utilizing personal protective equipment and social distancing to ensure victims of crime are safe,” Bull said.

The Fairfax County Department of Family Services reported a 28 percent increase in the number of monthly calls to the county’s Domestic and Sexual Violence Hotline. Since then, the numbers have stabilized, according to Angela Yeboah, a project coordinator for the department’s domestic violence action center.

“Emotional and psychological abuse also has been used as a tactic to keep victims in the home and fearful that if they leave, they will have limited housing and economic options due to the pandemic,” Yeboah said.

But advocates at Shelter House, Inc., a Reston-based nonprofit organization that offers services to homeless families and victims of domestic violence, have seen a different story.

The nonprofit, which operates the Patrick Henry Family Shelter in Falls Church along with the Artemis House in Herndon and the Katherine K. Hanley Family Shelter in Fairfax, reports a significant decrease in the number of calls since the pandemic began — a silence that concerned many service providers.

“We believe that this initial decrease was a direct result of stay-at-home orders and victims not being able to find safety from their abusive partner in order to reach out for help,” said Terrace Molina, the organization’s marketing and communications manager.

She says victims need our support “now more than ever.”

“For victims who are in our emergency shelter or other programs, maintaining employment has been a challenge, particularly while also tending to the needs of children who are attending school virtually,” she said

Advocates hope to bring more awareness about the issue in light of Domestic Violence Awareness Month, which happens in October.

Shelter House operates the county’s only 24/7 emergency hotline for victims of domestic violence, stalking and human trafficking. Individuals in need of help can call 703-435-4940. A domestic violence detective and a victim services specialist are also assigned to each Fairfax County police district station. Anyone in immediate danger should call 911.

END_OF_DOCUMENT_TOKEN_TO_BE_REPLACED

More Stories
Two Injuries in Crash on Leesburg PikePoll: Would You Ride in the New Merrifield Autonomous Shuttle?