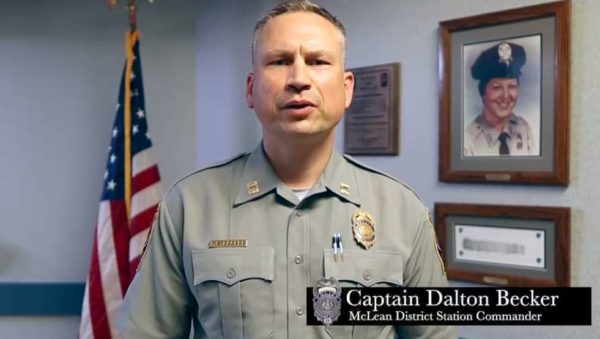 Amid national protests over police violence, the Fairfax County Police Department highlighted a few recent incidents in the McLean district that exemplified how encounters with the police should go.

The Fairfax County Police Department is no stranger to questionable use of force, but in the video, Sgt. Scott Shafer discussed details of two cases in the McLean Police District and one in the Fair Oaks district where a violent confrontation was resolved peacefully.

The first was at the intersection of Wild Blue Indigo Court and Wood Violet Court just south of Fairlee.

“In August, officers responded to a report of a naked man acting disorderly,” Shafer said. “Suspect was destroying items and shattered the front glass door of a home. It was determined there was a victim on scene who had been assaulted and needed stitches.”

Police said the naked man was peacefully taken into custody.

The other incident was outside of a Giant in McLean.

“Officers responded to this Giant for a weapon’s call,” Shafer said. “An argument occurred after an employee told a customer to wear a mask. The customer threatened the employee with a knife, stole an item, and ran away. Officers located the man who was holding a metal pipe and refused commands to stop. The man turned and threw a knife at the officers, thankfully missing them. Twelves knives were recovered from the man after he was arrested.”

Captain Dalton Becker, commander of McLean station, said the incidents just described are just a small piece of what officers see on a daily basis.

“I’m very proud of the McLean officers,” Becker said, “as well as all Fairfax County officers.”

The only officer-involved shooting of 2020 was in the McLean Police District. Police say that shooting occurred in January when a Special Weapons and Tactics Team (SWAT) entered a house while serving a narcotics search warrant.