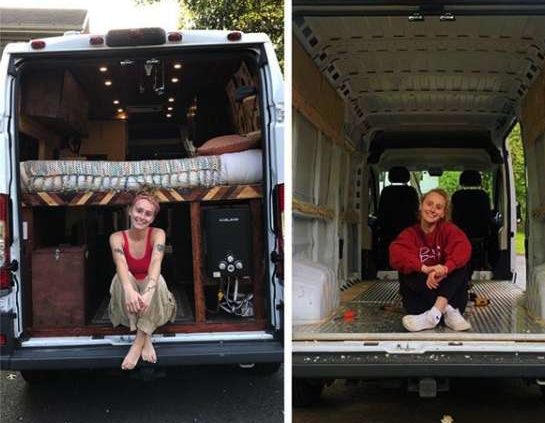 As her friends were leaving home for college, Caroline Trotter was leaving her home in Vienna for the van life.

Caroline’s decision to live a van, touring the country instead of beginning her freshman year of college in a classroom during a pandemic was a “genius” move in hindsight, her father Paul Trotter said.

Instead of following tradition and moving into a cramped and static dorm room somewhere, Trotter opted for a mobile one — a white, 2016 Ram ProMaster. Caroline, 18, left just after Labor Day and has far made it as far as Colorado, posting photos along the way.

With the COVID-19 pandemic closing college campus and keeping students stuck in dorms, Caroline’s decision in January to opt out of the normal freshman experience and to drive around the U.S. in a van seems like a prophetic move. The James Madison High School graduate was always “a bit of a non-conformist” her father said, so when his daughter came to him with the idea, he wasn’t surprised.

“I think it looks genius now,” Paul said. “It takes it from kind of being a weird idea that she thought of to being a pretty smart decision, to be honest. Especially with a lot of her peers are either back at home or are stuck in their dorm rooms kind of isolated and locked down.”

But just because is living in a van, doesn’t mean Caroline won’t be in school. While her father Paul said her travels will be a learning experience for his daughter she will be taking online classes for at least a year before she decides to give up the van life.

Paul who considers himself “handy” had to consult YouTube videos on how to convert the used-van into a fully-livable mobile apartment, complete with a toilet, sink, stove, bed and shower. The van is partially powered by solar panels on the roof with an internal ceiling fan that helps keep the van cool inside.

“We wanted it to be something that she could live out of basically full-time,” Paul said.

While she has no set plans, her father said, she will follow the warm weather around the country as falls becomes into winter, but just like her peers in schools, she will still have to be home for Thanksgiving and Christmas breaks, Paul said.

And for those who question a father who let his daughter forgo the traditional college life in favor of the van life, Paul has an answer.

“No one ever goes to see their therapist in their 30s because their parents supported them too much,” he said.