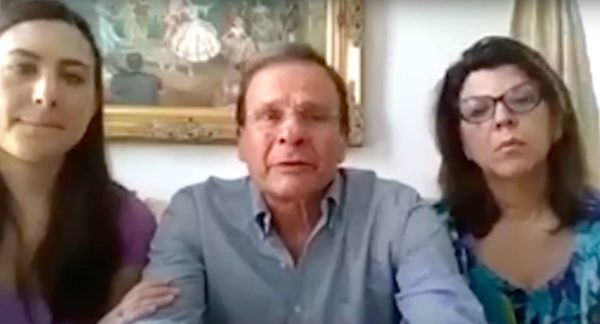 A 68-year-old man who was rescued by the Fairfax County Fire and Rescue Department (FCFRD) in Tysons took the unsual but gratifying extra step of calling the unit months later to update them on his progress and thank them for saving his life.

Rae Cronmiller, an avid swimmer, collapsed on Dec. 15 in the locker room at Sport & Health (8250 Greensboro Drive) in Tysons after experiencing a cardiac arrest following a one-mile swim. A physician in the locker room initiated CPR and a crew from Engine 429 in Tysons was already at the Sport & health for training. They were able to respond quickly and rescued on Dec. 15 after experiencing a cardiac arrest.

Cronmiller has recovered and got onto Zoom with his family to thank the physician and the FCFRD crew that saved his life.

“It was very moving,” Cronmiller said. “Not a day goes by that I don’t think about what happened to me, and how fortunate I am to have the best group of force responders in the world. You saved my life. I am of sound mind and body now, I feel better or as good as I did before the swim. I have you folks to thank and the individual who was there. If he’s able to watch this, I really appreciate his efforts.”

Several of the people involved in the rescue were on the call with Cronmiller and said, once the pandemic is over, they’d love to meet with him in person to shake his hand and see how he’s progressing. Andrew Rose, one of the paramedics who arrived, was among those on the call.

“It’s wonderful to see you doing so well,” Rose said. “We’re always thinking of you and looking for updates. We’re absolutely thrilled to see you at home with your family.”

“I’m so happy we were able to be there with you that day,” Calvin Alexander, another one of the paramedics said.

Sarah Thomas, a dispatcher involved with the rescue, said it isn’t often that FCFRD get to hear about the aftermath of a rescue.

“We never get the opportunity to hear any results, so we never know if somebody lives or not,” Thomas said. “So it is truly inspiring to see you and hear you. Thank you for that, because we never get to hear it or see it.”

The full release from the FCFRD is below:

On December 15, 2019 units were dispatched for a 68-year-old male in cardiac arrest with CPR in progress. Rae Cronmiller, an avid swimmer, collapsed in the locker room at Sport & Health after a one-mile swim. A physician, also in the locker room, initiated CPR. The crew from Engine 429, Tysons Corner, B-Shift was already at Sport & Health for physical fitness training and were able to respond quickly. Mr. Cronmiller was defibrillated six times by personnel and regained a pulse in the Emergency Department. Ultimately, Mr. Cronmiller made a neurologically intact recovery and was discharged back home to be with his family on Christmas Eve.

The great news is Rae survived! He is alive today thanks to all the great work by the links in the Chain of Survival – a by-stander who initiated CPR, 9-1-1 call takers, FCFRD personnel and the medical team at the hospital.

Recently, the Cronmiller family had a reunion with the FCFRD crew via Zoom. The shift was thrilled as it is not often that FCFRD personnel hear back from survivors.

END_OF_DOCUMENT_TOKEN_TO_BE_REPLACED

More Stories
Just Listed Properties: September 10Ramp Closures This Weekend and Next Week at I-66 and I-495 Interchange