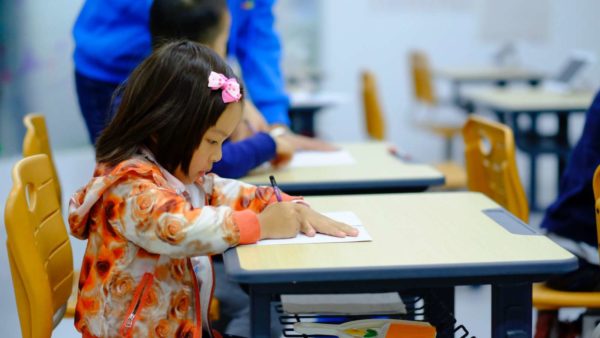 After noticing gender inequalities in STEM classes and extracurricular activities, the founders of Girls Who Math decided to intervene by setting up a tutoring service for girls and young women.

A free platform created in 2019, the program works by matching mentees with volunteers who have certain areas of expertise, Cynthia Wang, a founding member and the current director at Girls Who Math, said.

Wang is currently a senior at Thomas Jefferson High School for Science and Technology and lives in Falls Church. She is a part of the five-person team, which includes a Longfellow Middle School alumnus and a McLean High School student.

The program’s tutors currently help more than 700 students around the world with material for grades K-12 including computer coding, math classes and chemistry, the website said.

Girls Who Math offers more than tutoring — the program regularly hosts seminars that help girls with things like college admissions, Wang said, adding that they try to educate people on other free resources available.

Since the beginning of COVID-19, Wang said that the program has increased in popularity and many families are taking advantage of the service since kids are struggling to adapt to online classrooms.

Despite the group’s growth, Wang said that there are underlying problems beyond a demand for tutoring that need to be addressed. Before the program’s founding, she had been offering casual tutoring services to her peers and began to notice some problematic trends.

“I thought there was a discorporate amount of girls [who sought out tutoring],” she said, adding that she later learned this was because they felt uncomfortable asking questions during class because they would be unfairly judged by their peers.

It turned out that the problems didn’t end there. She also said that she noticed what could be labeled as sexism in other areas of academia as well — noting examples of when she sometimes felt unwelcome at clubs in middle school because the coaches would unjustly assume based on her gender alone that she didn’t have the skills to succeed or the ability to learn.

“It made something click in my mind,” she said.

Though Wang is still often the only girl in many of her clubs and extracurriculars, she hopes that Girls Who Math will empower young women across the globe and close the gender inequality gaps.

Anyone interested in getting involved with Girls Who Math can sign up online to become a volunteer or mentee.

Photo by Jerry Wang on Unsplash