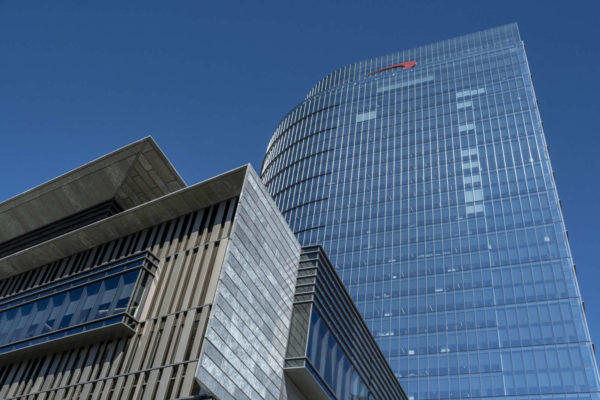 Capital One can now move forward with adding more office space for its employees at the Capital One Campus in Tysons.

The Fairfax County Board of Supervisors approved the proposal, which swaps a planned hotel with the office building, yesterday.

Gregory Riegle, the lawyer representing Capital One, told the supervisors that replacing the previously approved, but unbuilt, hotel with office space will increase economic development near the Metro.

Riegle said that the hotel had faced challenges prior to the pandemic, which the pandemic exacerbated. Riegle did not specify what the issues were.

While the pandemic’s impact on office use is still undetermined, Riegle said that the hotel-to-office swap will support the long-term vision for the Capital One Campus. Riegle said that Capital One intends to use the new office building just for its employees as the banking giant increases its presence in Tysons.

The campus currently has two office buildings, a conference center, a parking garage and surface-level parking, according to county documents. “Construction activity is on-going on a 31-story office building, an 8-story performing arts center, and a 28-story hotel/residential building,” the documents say.

The proposal did not receive any public comment during the public hearing yesterday.

Providence District Supervisor Dalia Palchik said that the change better fits the recommended percentage of office use in the Tysons Comprehensive Plan and that the area has other planned hotels.

As for economic development, Palchik added that the office building will support jobs for construction workers.

Palchik praised the proposal for gaining “widespread community support” in a few months, noting that the Gates of McLean and McLean Citizens Association both support the proposal.