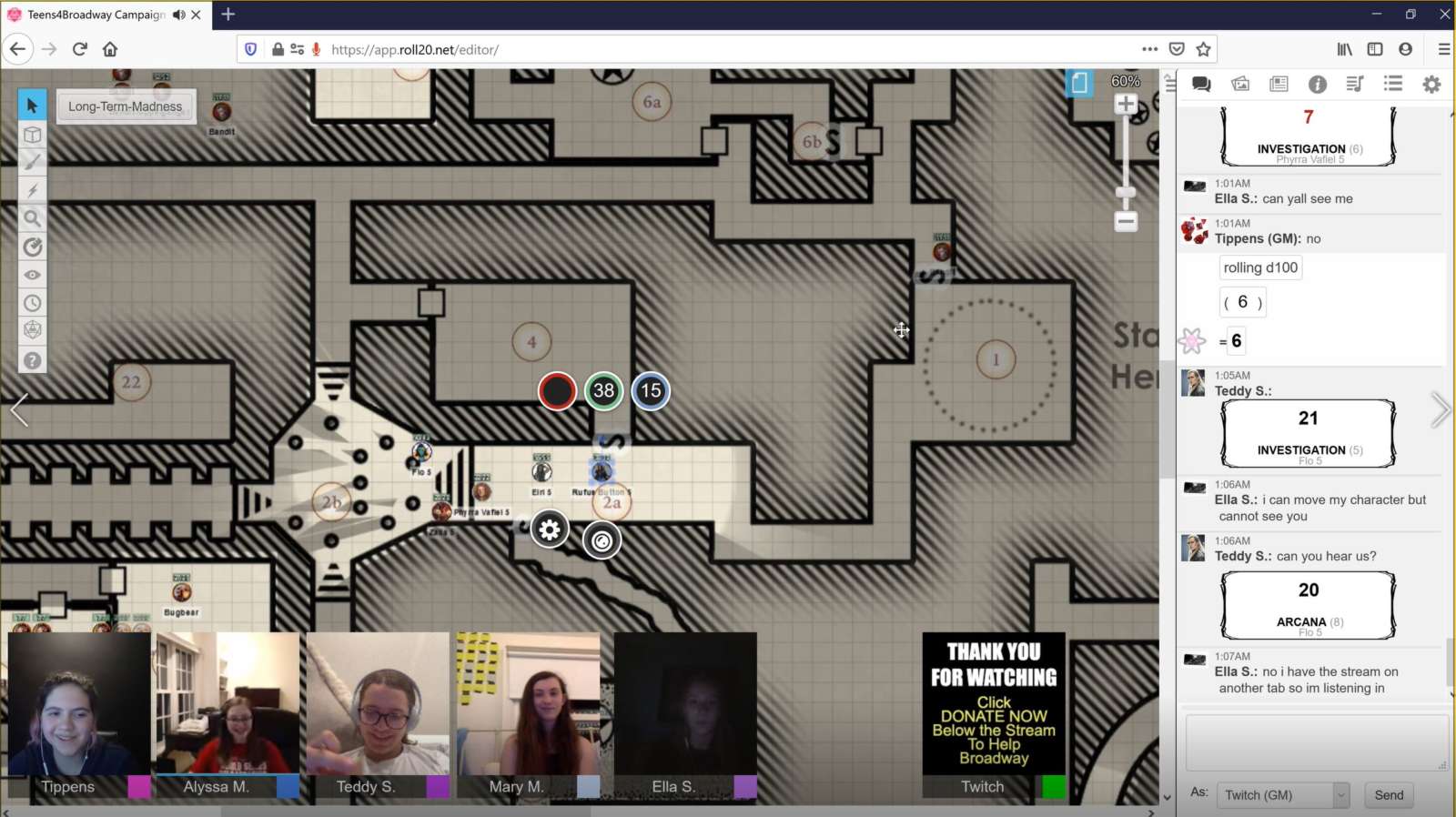 There were spells cast and monsters launched. There were fashion shows and combats. But, the real magic happened when the clock struck midnight on June 18 when teenagers around the world dropped the curtain on a three-day gaming spree to help Broadway actors impacted by the COVID-19 pandemic.

A group of about 70 teenagers from around the world gathered virtually for a 72-hour Dungeons & Dragons (D&D) marathon game this past weekend. The event raised $1,157 benefitting Broadway Cares, which supports actors.

“You could definitely tell that everyone had fun,” said Elizabeth Tippens, the organizer of Teens4Broadway, following the event. “People who have never met before were having a great time.”

Tippens, a rising junior at Langley High School and theater student, organized the game and Teens4Broadway along with seven other local teenagers. She said the idea came to her while playing D&D with her friends during the stay-at-home order. Her friends love theater and wanted to support the industry, so they decided to create a fundraiser to benefit actors.

“We’re informed about some Broadway things just from being in theater, and we also play D&D a lot,” says Lily Spiller, one of the dungeon masters.

“With COVID, there’s a lot of things going wrong for a lot of people in theater, because theater is a pretty in-person thing. We wanted to do something to help with that,” said Spiller.

D&D is a fantasy tabletop roleplaying game that allows players to create their own characters. A dungeon master serves as the game’s storyteller while maintaining the setting of the fantastical world. A roll of the dice can often determine the life or death fate of players’ characters, according to the D&D website.

From there, Tippens connected with Broadway Cares, a nonprofit that provides assistance and aid to actors. She and her friends came up with a live virtual marathon game of D&D to raise money for the Broadway Cares Actors Fund.

Teenagers from Virginia to Scotland gathered to play. Anyone interested was invited to watch the game live with the option to donate money. Viewers who donated certain amounts of money could influence the game and the players. For example, with a $25 donation, a healing potion could be delivered to any of the players.

“There were quite a few $50 donations, which were the party heals,” said Tippens, adding that $50 allowed donors to heal the entire party and give spell casters all their spells back.

However, the real chaos came from the $100 donations, which gave the donor the power to choose any D&D monster of the party’s level to be dropped immediately.

“The main way it was influenced was because of the big monsters people were dropping on us,” said Tippens.

The game took place over Roll20, an online roleplaying site geared towards tabletop roleplaying games, such as D&D. Each player was required to make an account on the site to be eligible to participate. The game was then live-streamed via Twitch, a live streaming service often used by gamers. The group had specific technicians to ensure that donations were verified and that the technology ran smoothly throughout the three-day marathon.

Despite the fun, Tippens said there were many technical challenges. These included a lag on the website due to the high volume of people, a problem with audio where some people couldn’t be heard, and kids not showing up to some of the later slots. Additionally, Roll20 was down for about three hours on one of the days, and a session was canceled because of it.

This marathon game may only be the beginning of more games in the future held by Teens4Broadway.

Tippens said she has projects in mind for how the game can be improved if it were to happen again, such as using different software for the virtual play. She also mentioned a potential name change and possibly supporting other organizations besides Broadway Cares to reach a broader audience.

“We definitely have ideas in the works for future events.”