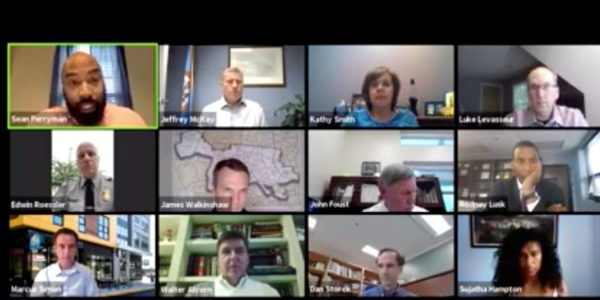 At last night’s town hall meeting by the Fairfax County NAACP, the organization’s president Sean Perryman met with local elected officials and community leaders to discuss the future of policing.

Since the killing of George Floyd in police custody and outrage over racial inequities in the U.S., the NAACP compiled a list of policy changes for how to address how police use force and report actions to the public.

Top demands for reform include:

Perryman said that the Fairfax County Police Department needs to see policy and budget overhauls to end systemic racism and better serve the community. Perryman said that nearly half the police use of force in the area is used against Black individuals even though they make up 10% of the population.

At the meeting, the attendees, which included Supervisors Dalia Pakchik, John Foust, Walter Alcorn and Chairman Jeff McKay, all agreed that changes are needed to improve the safety and security of every Fairfax County resident.

Fairfax County Police Chief  Edwin Roessler Jr. expressed a willingness to work with the NAACP on the proposed changes.

“I don’t think I oppose in whole any one of these items,” Roessler said, but added that there might be stipulations on certain topics.

A point of confusion at the meeting was about the transparency of data. Though everyone agreed that data is important to tracking issues and upcoming solutions, no one was on the same page when it came to the type of data and release date.

The FCPD police chief said that recent data on use of force data and school arrests should be released to McKay later this week, but the department is transitioning to a new data management system to achieve the goal.

“We have a lot of promises for data and more transparency but we aren’t actually getting the data,” Perryman said, adding that this data needs to be not only released to the county board, but also to the public.

“This would give the community some insight into what is happening,” Perryman said, adding that this data needs to include other information such as traffic stops and the races of officers and civilians involved.

The conversation on body-worn cameras for officers revolved around best practices and use.

Perryman suggested that officers shouldn’t be allowed to choose when to use them, calling it “an essential part of transparency,” he said.

“It is a waste of equipment, essentially a lens with a price tag, if there is no policy in place that prevents officers from turning this off or selectively turning it on,” he added.

When it comes to budget and funding, Perryman doesn’t believe the department should receive extra money from the state or the county for this project, suggesting that the cost should come from internal budget shifts.

“What we’ve seen in the past when there is a problem with the police, we give them more money to get more toys and we think that needs to stop,” Perryman said. “I don’t think there is an appetite for it here in the country or anywhere else actually.”

Tn the past, the panels have struggled to “have teeth,” according to Roessler, who added that the General Assembly would need to correct that.

Though there are challenges, Perryman said that people need to stop pointing fingers and create a substantial plan. He wants the panel to be independent and have the power to investigative incidents independently.

“This has to be a group that can stand up and can make clear recommendations to us,” McKay agreed. “I’ll be happy to work with you on the roster.”

Later in the meeting, Alcorn spoke up and talked about limiting the presence of firearms in the community.

“I’m not sure sending out folks with firearms is the best approach in 2020,” Alcorn said, adding that when someone calls 911, depending on the situation, there are better ways to address a community need.

Supervisors Palchik and Foust offered their support to continue the conversation with both FCPD and Fairfax County NAACP about new policies and best practices.

“We are not immune from making the types of reforms that are necessary to build the kind of confidence that everyone should have in our law enforcement agencies,” McKay said. “The most important thing for elected officials to do right now is to listen.”