Fairfax County is nearing its 12,000th COVID-19 case, according to the Virginia Department of Health.

Of the 389 outbreaks in Virginia, 61 are in the Fairfax Health District, which includes the county and its towns and cities — 51 are at long term care facilities, while two are healthcare settings and a correctional facility and educational setting both have one.

The Fairfax Health District also has Virginia’s only two reports of cases of the virus with Multisystem Inflammatory Syndrome in children. 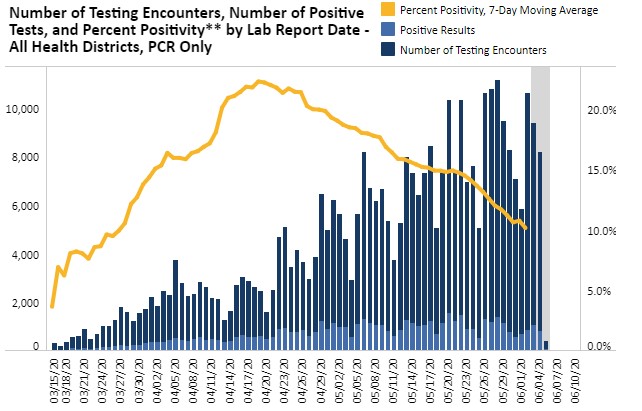 The Fairfax Health District continues to lead the commonwealth in the number of PCR tests, which directly detect antigens, with more than 55,000 testing encounters.

Statewide and in the Fairfax Health District, the weekly average of the percent of positive tests has been steadily declining since late April and the number of testing encounters has increased, according to VDH.

Even with the increased testing, Fairfax County officials say more is needed to address a growing racial disparity with the cases.

Officials said on Tuesday that they want to see more neighborhood testing sites and testing available for people who are asymptomatic.

Photo by CDC on Unsplash, graph via Virginia Department of Health