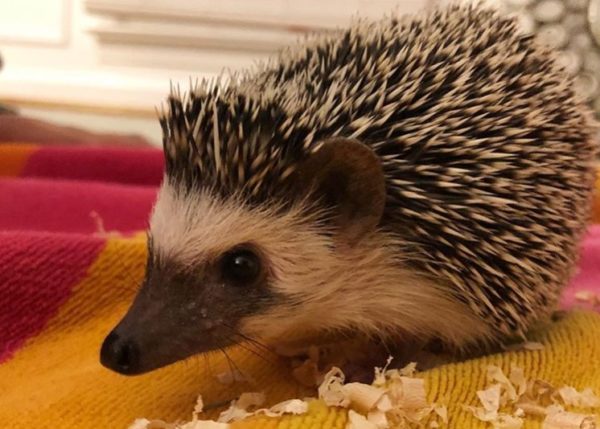 Once a week, Jayesh Edwards, a high school student in McLean, lathers up his pet hedgehog with unscented soap for babies. He uses a toothbrush to clean her quills, bathing her in lukewarm water in a sink.

“Her stomach is like fur, and you brush it all over. She really likes it,” Edwards told Tysons Reporter. “It’s like she’s getting massaged.”

Outside of bath time, Serena Quilliams — a twist on the famous tennis player’s name — can be found munching on her favorite treat of carrots or sleeping in Edwards’ sweatshirt pocket.

“Hedgehogs are normally [the size of] a soda can,” Edwards said. “She’s like 1.5 soda cans. She’s pretty big.”

She is now one of several pet hedgehogs in Fairfax County after the Board of Supervisors approved legalizing them — along with chinchillas and hermit crabs — as pets in January 2019. The City of Falls Church followed shortly after, allowing pet hedgehogs as of last June.

Hedgehog legalization in both the county and the city followed prickly debates focused on their high levels of maintenance as nocturnal animals — like requiring a room temperature above 70 degrees Fahrenheit to prevent hibernation, according to the Hedgehog Welfare Society.

Members of the county’s Animal Services Advisory Commission and Humane Society, along with Falls Church’s animal warden and police chief, argued against pet hedgehogs, calling them expensive pets that are challenging to care for and expressing concern that legalization could fuel the exotic pet trade.

There’s also the health concern: hedgehogs can spread salmonella, according to the Centers for Disease Control and Prevention. Pet hedgehog advocates were quick to point out that cats, dogs, frogs, hamsters and many other animals can also carry the bacteria.

The salmonella concerns weren’t a surprise to Edwards, because he’s had a monitor lizard for nearly a decade and a turtle for the last three years. “My mom is allergic to dogs,” he said. “Hedgehogs don’t shed.”

Edwards said he was “really upset” when he found out in sixth grade that the county didn’t allow the exotic animals as pets. Undeterred, he decided to push for legalization by writing to and meeting with Dranesville District Supervisor John Foust.

“I did so much research. I was kind of prepared for anything,” Edwards said.

In January 2019, Edwards, who was then a Longfellow Middle School student, shared his extensive research by testifying before the Board of Supervisors.

He shared how hedgehogs — like his monitor lizard — require heat lamps and a specific temperature range. They can spread salmonella but the risk isn’t higher than many other pets, he said.

“Another thing is that they fight, but if you had done any research on owning a hedgehog, you would know that you don’t keep them in pairs, because they fight,” Edwards said, adding: “And if you don’t want baby hedgehogs, you would definitely not keep a male and a female hedgehog together.” The board erupted in chuckles.

Later that day, the board approved the legalization.

“As soon they allowed hedgehogs in Fairfax, we sort of jumped on it,” Mindy Thomas, a Fairfax County resident, told Tysons Reporter.

Earlier this spring, her 12-year-old son Rhett finally got his hedgehog, which he named Band-Aid. “He’s a lazy, fat boy,” he said.

Like Edwards, Thomas said he did his research and was prepared for Band-Aid’s night-time activity — “I’m a really sound sleeper [so] he doesn’t bother me too much” — but still had some surprises.

“The thing about hedgehogs is, a lot of videos say that the quills — you get used to them, which you do,” Thomas said. “They are pokey.”

And then there’s Band-Aid’s love of scrambled eggs without salt, in addition to his regular diet of cat food, which his cat Lucy tries to steal, along with mealworms as treats. The food’s exit looks “like little jelly beans,” he added.

The Thomases and Band-Aid inspired another Fairfax County family to become “hedgie” parents, with 17-year-old Steven Eckloff’s detailed 20-page PowerPoint winning his parents over to the idea.

Eckloff got his hedgehog Ollie on March 28 — two days before Gov. Ralph Northam announced the stay-at-home order due the pandemic.

To maximize his time with Ollie, Eckloff has adjusted his hours — waking up around 11 a.m. to stay awake later and then going to bed around 2-3 a.m. “I hear the little pattering of his feet when he’s running on the wheel at night,” he said, adding that Ollie likes to play with toilet paper rolls.

Since a ban was placed in the 1990s on the importation of wild-caught African pygmy hedgehogs — the most common type of hedgehog pet — to the U.S., prospective owners have to find their pets at breeders or shelters.

Many of the websites for hedgehog breeders in Northern Virginia that Tysons Reporter viewed included resources and guides for how to keep the pets safe.

Riddle’s Hedgehogs, a small to mid-scale breeder in Frederick County, asks for people’s addresses when they fill out their online applications and Christie Riddle told Tysons Reporter that she has caught people trying to skirt the law.

Riddle tells people she cannot sell to them if pet hedgehogs are not legal in their area, noting that appropriate veterinary care is often hard to find in those areas.

“As a breeder, I look for red flags such as if it is intended for a young child,” Riddle said. “Hedgehogs are difficult for young children to handle. I look for stable homes that can care for a hedgehog long-term.”

“It is not a starter pet,” Caitlyn Maltese told Tysons Reporter, adding that she’s seen a lot of pet hedgehogs gaining traction on TikTok. “The most important thing for me is that people don’t get them unless they know what they are walking into.”

Maltese shared the less glamorous side of hedgehog ownership: a dirty wheel that she cleans daily, spending at least 30 minutes socializing them every day so they don’t get grumpy and a possible hefty price tag for care.

Maltese, who is part of a Facebook support group for hedgehog owners, said she’s “seen some horrific stuff” including rotting feet and stories of abandonment.

“It is not a starter pet,” Maltese said, adding that she researched extensively before deciding to become an owner.

She was living in Maryland when she got Albus, but then moved to the Mount Vernon District of Fairfax County right after the legalization, landing a shorter commute to her job in Alexandria.

Albus is “a complete sweetheart” and “very well socialized,” Maltese said. Unfortunately, he’s had a variety of health issues from teeth falling out that required Maltese to grind up his food to heart disease that meant she had to syringe feed him medication.

When she recently took him to the Stahl Exotic Animal Veterinary Services in Fairfax, COVID-19 precautions prompted a new drive-thru service where staff brought Albus into and out of the facility while Maltese waited in the car.

Maltese, who has hedgehog insurance, said that the medical bills have reached hundreds of dollars. Through the highs and lows, she insists Albus is completely worth it.

“He’s like my first child,” she said. “I’ve had a lot of other pets, but he’s the one that has required so much… They are such wonderful creatures to have.”

Maltese added that she loves that he’s nocturnal because he’ll cuddle with her while she works during the day. “He’ll squeak when he’s dreaming.”

Maltese found a community of fellow hedgie parents on Facebook and also through her Instagram account for him. She’s also met people at Hedgie-Con, an annual convention for hedgehog owners in the U.S. and Canada.

“They were amazed by how friendly he was,” Maltese said about her Hedgie-Con 2019 experience. “It’s super nerdy.”

One of the central arguments against hedgehog ownership was a concern about people struggling to care for their pets, leading to abandonment and surrenders.

Since Fairfax County legalized them, the county’s Animal Protection Police haven’t received any reports of abandonment. The one request to surrender ended up with getting the hedgehog re-homed so it never went to the shelter, according to information provided through Police Spokesperson Erica Webb.

Webb said that the Animal Protection Police did not have information to share regarding whether pet hedgehogs are affecting the exotic pet trade.

Neighboring counties have had similar experiences. “We have not had any hedgehogs come in, nor have we had any calls about them this year,” Talia Czapski with Loudoun County Animal Services told Tysons Reporter.

Chelsea Jones with Animal Welfare League of Arlington said they’ve only taken in one hedgehog during the last five years. “They are not surrendered to us very often at all,” Jones said.

Riddle said that Fairfax County’s legalization has boosted her business as a breeder.

“Demand has been greater in the past year, partly due to more interest from Fairfax County and also partly due to growing interest in general in having hedgehogs as pets,” Riddle wrote in an email. Riddle said the average cost of her hedgehogs, which can vary based on colors and sex, is $250.

Riddle said that the increase caused her to cut off her waiting list, which had 12 people as of late April. “Over the past year, 12.5% of my hedgehog adoptions have been from Fairfax County,” she said.

It’s unclear if hedgehog breeders are seeing the same uptick in adoptions like for cats and dogs due to people wanting furry companionship during the coronavirus pandemic. While the owners Tysons Reporter talked to said they like having hedgehog pets, the hedgehogs seem to have mixed feelings about their owners being home constantly.

“He’s definitely getting annoyed that I’m always around,” Thomas, who is doing online learning at home, said. Now, instead of cuddle time in the evening, he’s taking Band-Aid out of his cage several times a day and for longer periods of time.

Now that Edwards, the McLean student, has Serena Quilliams, she doesn’t socialize with the other pets. “The lizard would definitely attack her and probably get impaled,” Edwards said. “It wouldn’t go well.”

Overall, Edwards thinks pet hedgehogs are ideal pandemic buddies. “I hang out with her a lot,” he said. “She’ll play when you want to play.”

His assessment: “They are good pets.”