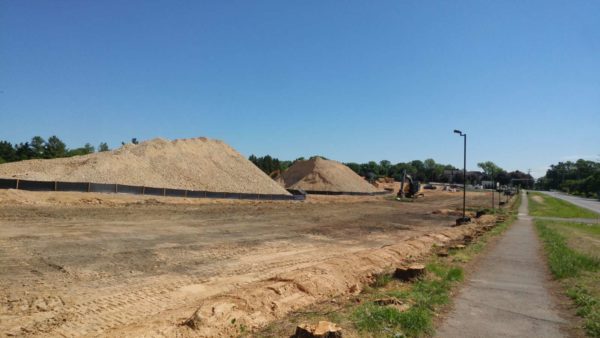 After people in Tysons noticed roughly 100 trees were cut down on the edge of an upcoming townhome and condominium development, a community Twitter account asked its followers who might be responsible.

Tysons Reporter found the answer — the property along Magarity Road is slated for redevelopment by the Toll Brothers Group. The group claimed responsibility for taking down the trees.

Previously, the property named The Commons at Mclean was abandoned and overgrown by weeds until taken over by the new developers.

Eric Anderson, the president of the Toll Brothers Group, said that the trees were in a development right of way and needed to be taken down.

“Per the [Tysons Comprehensive Plan], there were requirements in place to allow for [a] future right of way on all sides of the property,” he said, adding that the space will be used to build a bike lane, sidewalks and an expanded roadway.

“I ran that trail this morning. Missing the sweet smell of pine. They were old-growth trees as well, probably 40-50 yrs old each,” one person commented on Twitter.

By the time the new development is complete, Anderson said that 355 new trees will be planted on the property.

Last night as we slept 85+ trees were shamelessly murdered in #TysonsVA 22102 along Magarity Rd (from Anderson Rd to Westgate Elem). Who's responsible for this? RT if you love #trees! pic.twitter.com/zW9vJydPft