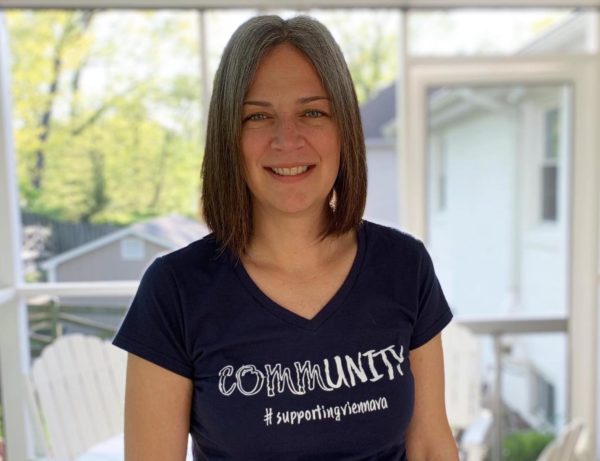 To support other businesses around Vienna, locally-owned French Press Printing created a fundraiser that has collected more than $7,000 so far.

By selling specially designed t-shirts, owner Sarah Bohn said that she not only managed to raise funds for her neighboring buisnesses challenged by COVID-19, but also drawn attention to the compassion shared by Vienna residents.

Part of the reason the fundraiser has been so successful is that “people want to be involved in their community,” she said. “People didn’t want to miss out on an opportunity to participate.”

For $20 people can purchase a dark blue t-shirt, which comes in two styles and has white lettering listing the 35 participating buisnesses on the back and the word “community” on the front.

Though all of the local buisnesses featured benefit from the extra advertising, some of them chose to forgo the money and either request it be given to other local buisnesses who need it more or take it to donate to a charity of their choice, Bohn said.

Frame Factory, for example, took its share and purchased fresh groceries from Caboose Tavern to share with locals facing food insecurity, according to Bohn.

Originally, Bohn ran a trial fundraiser in April and brought back a second edition out of popular demand. New orders will be accepted through June 5, according to the website.

More than 100 shirts have been ordered so far in the second fundraising round, Bohn said.

Currently, Bohn said she is in the process of sending out the original orders, adding that people who ordered recently will receive their shirts after the June 5 order deadline.

Despite the hardship many buisnesses are facing, Bohn commented on the “wonderful energy” around town. She said she noticed that more and more buisnesses are reaching out to one another and forming partnerships, finding ways they can coordinate packages and deals for customers.

Around town, Bohn said she looks forward to watching people walk down the streets in their #supportingvienna shirts as a reminder of the small-town feel that Vienna shares with residents.