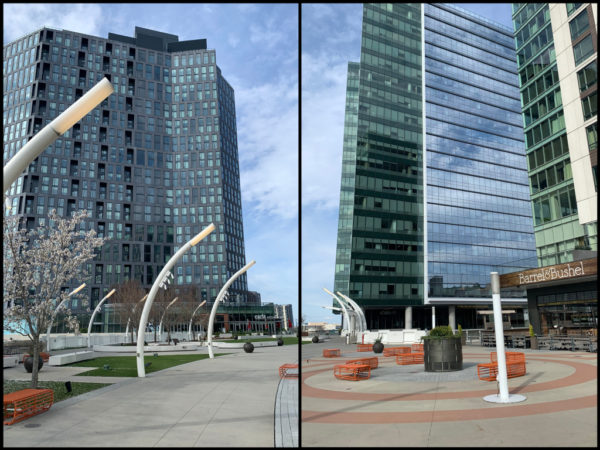 Plans for an apartment building and office tower in Tysons are on hold as the coronavirus pandemic continues to wreak havoc on the economy.

Macerich, the operator of Tysons Corner Center, owns half of the Tysons Tower office building and Vita apartment building outside the mall. In 2019, Macerich was working to finance both properties by the fall.

Macerich’s CEO Tom O’Hern said during earnings calls in late 2019 and early 2020 that Macerich was under contract to sell its 50% interest of Vita for roughly $82 million.

But during the first-quarter conference call on Tuesday, O’Hern said that discussions to sell the apartment building stalled when the pandemic hit the U.S.

“Once the entire market got volatile say mid-March, [our partner] decided to hold off,” O’Hern said. “We like the asset. We like the diversities in net operating income. So, we’re just fine hanging on to that 50% interest.”

As for the 22-story office building, Scott Kingsmore, the CFO for Macerich, said that Macerich got a 10-year, $190 million commercial mortgage-backed securities loan on Tysons Tower in September.

In 2012, Macerich announced that Intelsat, a satellite services company, signed a 15-year agreement to move its headquarters to Tysons Tower, taking up more than a third of the building. It’s unclear what will happen to the office building now that Intelsat filed for bankruptcy this week, Fortune reported.

When asked in February about the fate of the office tower, O’Hern said that Macerich has an “open mind” about selling it.

“The transit station has been built there and both assets are doing quite well,” he said. “That could possibly be a candidate to be sold.”

During the rest of the earnings call on Tuesday, Macerich executives talked about rent collection difficulties and what their malls will likely look like when they reopen.

Kingsmore, the CFO, said that Macerich collected about 26% of its billed rent in April and, as of May 8, had received about 18% of the May rent.

Kingsmore said that he expects more rents to get paid in May, adding that Macerich is working to collect past due rent.

“The vast majority of our leases do not abate our tenants’ obligation to pay rent,” he said.

Macerich, a publicly-traded real estate investment trust, has seen its stock nosedive from $60 per share in December to roughly $6 since March — the same price as its low point during the 2008 recession. Macerich has also reduced its dividend.

While Macerich and other mall operators are struggling during the pandemic, the three executives said they recognize the stress retailers face.

“Even growing and accelerating e-commerce sales cannot make up the lost profit sales from physical store closures,” O’Hern said, adding that e-commerce is expensive because of high delivery costs.

“Retailers want to open as soon as it’s safe to do so,” Healey said. “Online business will never replace the importance of the physical store.”