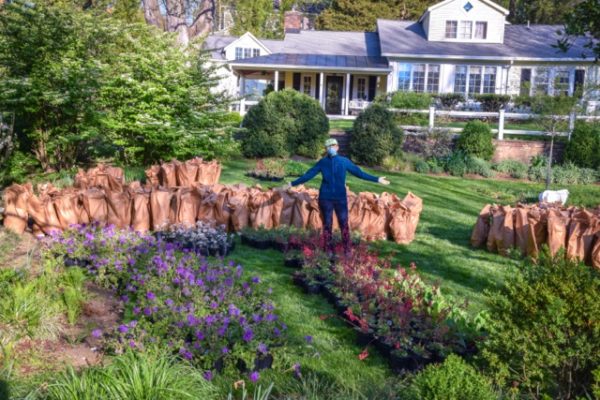 A McLean resident and her two kids recently decided to help a local non-profit while also providing neighbors with spring flowers to adorn their yards.

Lynley Ogilvie and her two teenagers, George and Jayne, who attend McLean High School raised more than $5,000 for SHARE of McLean by selling flowers and plants to neighbors who wanted to start gardens.

SHARE is based in McLean and helps people who are struggling with food insecurity and poverty, according to its website, adding that the organization can assist with paying bills, clothing and other needs.

As a professional landscape designer, Lynley said she was inspired to start the fundraiser after receiving questions and inquiries from friends and clients asking for recommendations places to find plants.

Her kids helped her mobilize by designing programs such as order forms through Google Forms and coming up with the idea to buy in bulk from a source out of Maryland and resell the greenery — ultimately making a profit which could benefit SHARE, she said.

“People were very excited to support SHARE, and they were struggling to get donations,” Lynley said.

As a member of Immanuel Presbyterian Church, Lynley said that the church frequently donates to SHARE, and the non-profit saw a lack in donations after the COVID-19 pandemic hit the economy.

According to Lynley, several other religious groups around the area are also bolstering efforts to support the local organization.

“One of my good friends is actually the Rabbi at Temple Rodef Shalom,” Lynley said. “She came to my sale and said they are also trying to support SHARE.”

People who bought plants from the family paid in advance through Venmo, according to Lynley, who added that people then signed up for a pickup time slot so they could practice safe social distancing.

Throughout Friday (April 10) and Saturday (April 11), roughly 90 people came by to pick up their greenery, Lynley said.

The funds have already been delivered to SHARE, she added.

Going forward, Lynley said she hopes people will continue to build and foster gardens because they help people maintain a “sense of control” in their lives and allows them to “reconnect with nature.”